GRAHAM RAHAL ON MAKING SOME MAGIC AT TORONTO
The 2019 Honda Indy Toronto will be Graham Rahal’s 14th Indy car race here and 15th overall (Atlantic 2006).  In 12 Indy car races, his best start of second came in 2017 with RLL and best finish of fifth came in 2010 with Newman/Haas Racing. He has three, top-five starts and four, top-10 finishes. In 2018, changing wet conditions in qualifying limited his starting position to 13th.  In the 80-lap race, he was one of only four drivers that started on the harder primary tires to go off-strategy.  Andretti and Kanaan got by Rahal on the faster alternate tires and then by Bourdais. He got by Chaves for 15th and then began cycling up from L13 on as drivers began making their first stops. He cycled into second behind King by L24 and held the spot when Hunter-Reay drove into the tires and Rossi and Power made contact. The timing of the caution hurt Rahal, who had yet to pit as had leader King and eighth place Pigot. Once he made his stop under caution and returned to the track, he was in 16th place and was unable to capitalize on the track position.  On Lap 34 the race restarted and he had to take evasive action to avoid running into King ahead which set up a chain reaction behind him and another full course caution came out. Once the six-car accident was cleared, he came to the pits and the team had to ultimately pull the car behind the pit wall to replace the tow link and lower rear wishbone.  When he got back on track, he was 15 laps down in 23rd place but the team needed to make every attempt to gain points if others dropped out and ultimately he finished 21st.. More details for other years are available upon request. His highest street course finish this season is fourth in Long Beach although he took the checkered flag third before a post race penalty lowered his rank. He feels he and the team are ready for the challenge.

“I think we should be very competitive. While our street course package has lacked a little this year, I think we can build upon Long Beach and our Toronto setups from last year and make some magic this time around.  It was good to get a break in the schedule to come back rested and focused on the next three races in a row. The guys will be ready. I will be ready, and we’re up for the challenge. I’m looking forward to it!” 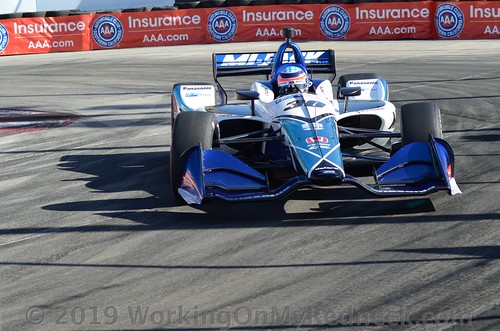 TAKUMA SATO LOOKS FORWARD TO TORONTO AFTER SETTING THE FASTEST PRE-Q TIME LAST YEAR
This will be Takuma’s 12th race here. In his 11 previous races, his best start is seventh last year with RLL and his best finish is fifth in 2016 and Race 2 in 2014 with A.J. Foyt Racing.  He was on target for his best finish to date in Toronto last year after having set the second fastest time in practice on Friday before he set the fastest time in the final practice on Saturday before qualifying. Those sessions were on a dry track and rain came during qualifying to mix things up. He was disappointed with his best start of seventh place but was competitive in the race until contact ended his day after he ran as high as third. Overall, he has four top-10 finishes at Toronto and is looking forward to another competitive weekend like last year in the final street course race of 2019.

“Toronto is a one of my favorite venues. It has a long history of racing and downtown is just gorgeous with a lot of cool restaurants so I think it’s a very popular one on the schedule. The fans are very enthusiastic and the atmosphere is great. We had a Japanese fan club tour a couple of times too so everyone seems enjoy the Toronto race very much. The field was tight (last year) as the series gets very competitive and a little condition change affected our speed. We had a really good pace and had a good start but at same time we had a small issue during the race too and unfortunately I had an incident. It was really a shame because the podium finish was possible but our competitiveness in the race was encouraging. We should absolutely be competitive again in Toronto. We are trying a new concept this year and it works well in many areas. We haven’t shown a great competitiveness on street courses this year but we are confident we can this time.”

TAKUMA ON THE MOST CHALLENGING PARTS OF THE TORONTO COURSE
“Street courses are always challenging as it’s no margins for error especially in Toronto which is famous as one of the bumpiest and it is quite tricky as the surface changes multiple times even in a single corner so to get it right and be consistent is quite challenging but I like it. Also, the track has a long straight followed by a heavy braking (area) down to the hairpin and that provides a lot of opportunity for overtaking.  It’s a very exciting race every year so I am really looking forward to the weekend.”

POINTS BATTLE AFTER 10 OF 17 RACES
Heading into Round 11 of 17 at the Honda Indy Toronto, Sato has a total of 292 points and is ranked sixth overall.  He trails leader Josef Newgarden by 110 (402) and third place Simon Pagenaud by 49 (341).  Graham Rahal is eighth with 244 and is buoyed by strong performances of late.

“We have momentum,” said Rahal. “Our race cars are good and our team is performing at a high level. We are in with a great shot of reaching the top five for the championship or maybe better!”