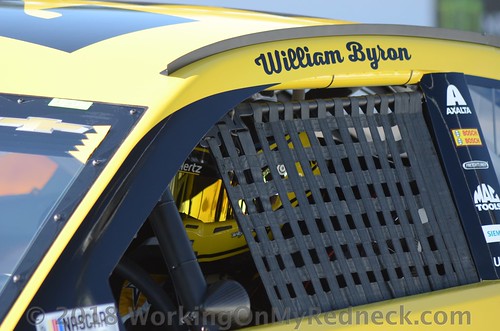 Byron edged last year’s pole winner, Alex Bowman, by .036 seconds for the top starting spot in the 61st running of NASCAR’s most prestigious race with a lap at 194.305 miles per hour (46.319 seconds) in the final round of knockout qualifying.

The Busch Pole Award was the first for Byron in 37 tries. The 21-year-old is the eighth driver to contribute to the total of 13 Daytona 500 poles won by Hendrick Motorsports, which won its fifth straight.

Only Byron and Bowman are locked into their starting sports for next Sunday’s race. The remaining 38 starting positions will be determined in Thursday night’s Gander RV Duel 150-mile qualifying races (7 p.m. ET on FS1, MRN and SiriusXM NASCAR Radio).

“We felt we were prepared and ready and this was sort of the first step of our process together,” Byron said of his new partnership with Knaus, who moved to the No. 24 car this year after winning seven titles as Johnson’s crew chief.

“Hopefully, it goes well next Sunday. We can kind of hang out during the Duel races, learn a little bit. It’s awesome.”

The pole was the 700th for Chevrolet in the Monster Energy NASCAR Cup Series.

As fast his car was, Byron acknowledged his lap wasn’t quite perfect.

“We lacked a little bit getting up to speed,” Byron said. “I think a little bit too much wheel spin. This thing is fast, and it’s obviously a lot of credit to the guys. I’m looking forward to next Sunday.”

In a session that both establishes the front row for next Sunday and sets the lineups for the Duels, Sunoco Rookie of the Year contender Daniel Hemric qualified fifth in his No. 8 Richard Childress Racing Chevrolet, giving Chevys the top five laps in the final round.

Reigning Cup champion Joey Logano was sixth in the fastest Ford—the first competitive outing in the Cup series for the new Mustang—and 2017 champ Martin Truex Jr. was seventh in the quickest Toyota entry.

“We ran about what we thought we would, maybe a tick better,” Busch said. “Didn’t expect the rest of the field to be as fast as they are, so we’re a little farther down on the lineup than we’d like to be.”

Two of the six drivers in open cars—those without charters—locked themselves into the Daytona 500. The first was Tyler Reddick, who was a strong 16th in the first round. The second was Casey Mears, who edged the non-chartered No. 71 Chevrolet of Ryan Truex by .028 seconds for the 26th fastest lap.