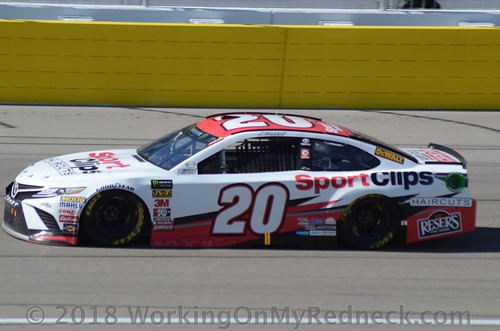 Erik Jones: “I’m looking forward to The Clash. It’s always fun to get back to Daytona and get things rolling again. It’s always fun to be in The Clash. I was in my first one last year and to have another shot to go out and run this year is going to be a lot of fun. It kind of gets you back in the racing mode and back in the right mindset. Looking forward to having a shot to try and go out and start the year with a win.”

Chris Gayle: “I can’t wait to get the race season started, and get a short tune up this weekend in the non-points Clash race. It’s been since October since anyone has done any superspeedway racing, so it’ll give Erik and the team a chance to knock the rust off and get back in full form before the 150’s and the 500 the following week. There are also a few small rules changes, and the Clash will give us a shot to work thru some of the new rules and how they’ll affect the handling of the car. So, we can treat it like an extra practice session for the 500.”

Sport Clips Haircuts is headquartered in Georgetown, Texas. It was established in 1993 and began franchising in 1995. The sports-themed haircutting franchise, which specializes in haircuts for men and boys, offers online check infor clients, and is ranked by Entrepreneur Magazine as one of the “Fastest-Growing Franchises’ and #17 in its “Franchise 500.” There are more than 1,800 Sport Clips stores open in the U.S. and Canada. Sport Clips is the “Official Haircutter” of the Veterans of Foreign Wars (VFW), offers veterans preferential pricing on haircuts and franchises, and was named a “2018 Best for Vets: Franchises” by Military Times. Sport Clips provides “Haircuts with Heart” through its annual Help A Hero fundraiser that has contributed $6.5 million to the VFW; national partnership with St. Baldrick’s Foundation, the largest private funder of childhood cancer research grants; and other national and local philanthropic outreach. Sport Clips is a proud sponsor of Joe Gibbs Racing’s NASCAR drivers Erik Jones and Denny Hamlin, Dale Coyne Racing with Vasser-Sullivan Indy Car driver Sebastien Bourdais, and partners with numerous NCAA and professional sports teams. To learn more about Sport Clips, visit sportclips.com.