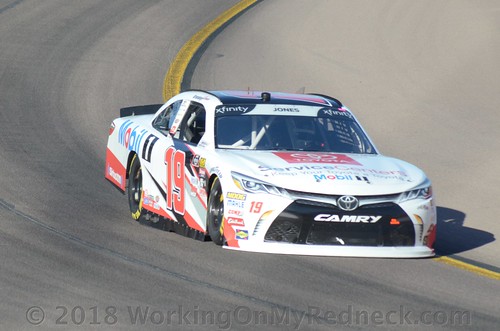 Joe Gibbs Racing (JGR) announces today that NASCAR Xfinity Series (NXS) driver Brandon Jones will be back behind the wheel of the No. 19 Toyota in 2019.

After his first full season at JGR and third complete Xfinity Series season, Jones is ready to carry substantial momentum into 2019 after earning career-high stats in 2018 with two top-five and 17 top-10 finishes, winning a pole and leading 173 laps.  He also qualified for the NXS playoffs and finished ninth in the 2018 driver points standings.

Along with his strong debut at JGR, Jones will be teamed up with a new crew chief, Jeff Meendering.  Jones and the No. 19 Team will draw from Meendering’s experience and leadership and will be strong, consistent and positioned to challenge for the 2019 Xfinity Series Championship.

“I couldn’t be more proud of our 19 team and the huge strides and experience we gained last year,” stated Brandon Jones.  “There is no doubt it was a big team effort and I am very excited about being back at Joe Gibbs Racing this season.  With the addition of our new crew chief Jeff Meendering and his leadership, we should be in the mix every weekend competing for a championship.   I am really fortunate to have partners like Menards and Juniper Networks returning this season and their support means the world to me.”

Additional sponsorship for Brandon Jones and JGR’s No. 19 Xfinity Series Toyota Supra will be announced soon.

Joe Gibbs Racing (JGR) is one of the premier organizations in NASCAR with four Monster Energy NASCAR Cup Series teams, three NASCAR Xfinity Series teams and a driver development program. Its 2019 driver lineup will consist of Denny Hamlin, Kyle Busch, Erik Jones, and Martin Truex, Jr. in the Monster Energy NASCAR Cup Series. Meanwhile Christopher Bell and Brandon Jones will each run fulltime in the NASCAR Xfinity Series in 2019, joining Kyle Busch, Denny Hamlin, Jeffrey Earnhardt, and Riley Herbst, all of whom will run partial schedules. In addition, Herbst and Ty Gibbs will share duties behind the wheel of JGR’s ARCA Series entry. Based in Huntersville, N.C., and owned by Joe Gibbs — a three-time Super Bowl winner as head coach of the Washington Redskins and a member of the Pro Football Hall of Fame — JGR has competed in NASCAR since 1992, winning four Cup Series championships, and five Xfinity Series owner’s championships along with more than 300 NASCAR races, including four Brickyard 400s and two Daytona 500s.