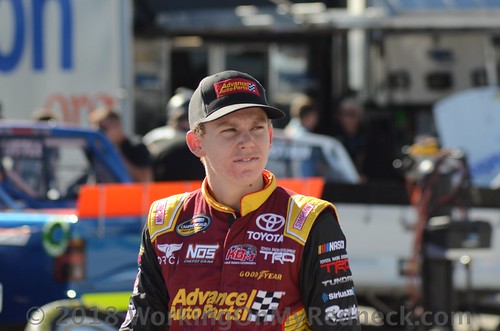 Joe Gibbs Racing (JGR) announced today an extended multi-year partnership with Riley Herbst that will see the 19-year-old driver return to JGR for his third year and compete in both the NASCAR Xfinity Series (NXS) and the Automobile Racing Club of America (ARCA) Series. As Herbst continues to gain valuable track experience on his move to NASCAR’s top levels of competition, Monster Energy Drink will join Herbst as his primary sponsor in both the Xfinity and ARCA Series, along with Advance Auto Parts and ORCA Coolers.

Herbst made his NXS debut at Iowa Speedway on June 17, 2018, earning a strong sixth-place finish driving the No. 18 Toyota Camry. This season Herbst will shift gears and climb in the driver seat of the No. 18 Toyota Supra for eight races joining veterans Kyle Busch and Denny Hamlin, along with JGR newcomer Jeffrey Earnhardt. The team will be led by freshman crew chief Ben Beshore who joins the JGR NXS program after serving as a race engineer for the JGR Cup program.

“To have Riley (Herbst) join our Xfinity program this season is a great continuation of what he’s been able to build with JGR the last two seasons running the ARCA series and Xfinity series last year,” said Steve de Souza, Executive Vice President of JGR NASCAR Xfinity Series/Development. “We’re excited to be a part of his career and help him grow as a driver. It’s important to JGR to continue building drivers and help build the sport from the ground up and Riley has certainly been a part of that and a product of what we strive to accomplish with our development program with both the ARCA and Xfinity series. We’re also adding Ty Gibbs (Coy Gibbs’ son) to the ARCA program this season and helping him continue to build his career both on and off the track. Definitely exciting things for our young drivers and should make for another great year at JGR.”

In addition to his NXS races, Herbst will return to the No. 18 Toyota Camry in the ARCA Series for seven races. Herbst will share the No. 18 Toyota Camry with Ty Gibbs who will take over driving duties for 12 races. Mark McFarland will lead the duo for the 2019 season with Monster Energy Drink serving as the primary sponsor for the entire ARCA season with Herbst and Gibbs.

“Monster Energy loves supporting young talent like Riley (Herbst) and Ty (Gibbs),” said Mitch Covington, Vice President of Sports Marketing at Monster Energy Beverage Company. “We wish them the best of luck this season and can’t wait to see these guys go at it soon.  Riley has been with our company several years and we are glad to see him progressing.”

Herbst will make his first ARCA Series start of the season at the famed Daytona International Speedway on February 9, and his first NXS race will be at Richmond International Raceway on April 12.

“To be a part of JGR the last few years has been a great opportunity for me and I’m excited to compete in both the Xfinity and ARCA series this year,” said Herbst. “The new Toyota Supra’s are pretty sweet and I can’t wait to get behind the wheel of one and take it around the track. We’ve got goals set for this year and it would be cool to get my first win this season and take the new Supra to victory lane. 2019 is going to be a fun year and I’m ready to get it started at Daytona in a few weeks.”

Gibbs will compete in his first ARCA race on March 8 at Five Flags Speedway in Pensacola, Florida.

“I’m really excited to join the ARCA program at JGR this season,” said Gibbs. “I’ve grown up around racing and it’s something that I love. Running late models the last few years has been fun and helped me learn a lot, but to now move up to ARCA is a big step for me and a challenge I’m ready to tackle. This year should be fun learning new, bigger tracks and hopefully along the way we can grab a few wins.”

Joe Gibbs Racing (JGR) is one of the premier organizations in NASCAR with four Monster Energy NASCAR Cup Series teams, three NASCAR Xfinity Series teams and a driver development program. Its 2019 driver lineup will consist of Denny Hamlin, Kyle Busch, Erik Jones, and Martin Truex Jr. in the Monster Energy NASCAR Cup Series. Meanwhile, Christopher Bell and Brandon Jones will each run fulltime in the NASCAR Xfinity Series, joining Kyle Busch, Denny Hamlin, and Jeffrey Earnhardt, all of whom will run partial schedules. In addition, Riley Herbst and Ty Gibbs are currently in JGR’s driver development program. Based in Huntersville, N.C., and owned by Joe Gibbs — a three-time Super Bowl winner as head coach of the Washington Redskins and a member of the Pro Football Hall of Fame — JGR has competed in NASCAR since 1992, winning four Cup Series championships, and five Xfinity Series owner’s championships along with more than 300 NASCAR races, including four Brickyard 400s and two Daytona 500s.