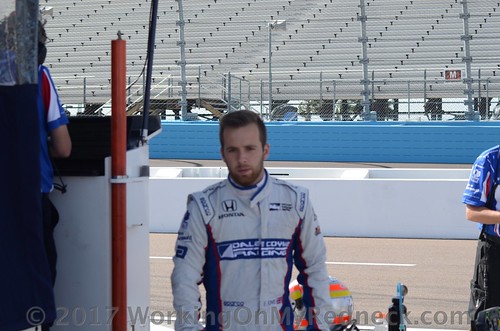 Ed Jones speaks confidently about how the experience of two eventful years in IndyCar Series racing have helped prepare him for his next ride.

The offseason sting of not being retained by Chip Ganassi Racing has been more than offset by the joy of an October announcement that he will drive the No. 20 Ed Carpenter Racing Scuderia Corsa Chevrolet in all 12 road- and street-course races in 2019, as well as the joint team’s No. 64 entry in the 103rd Indianapolis 500.

The 23-year-old driver from Dubai was a hot commodity after finishing third in the 2017 Indy 500 and earning Sunoco Rookie of the Year honors while with Dale Coyne Racing. In 2018, he improved one spot to 13th in the points with Ganassi, for whom he had eight top-10 finishes and two podiums.

While humbling to lose that ride with one of the series’ most successful teams, Jones is as eager as ever to show what he can do with his new team in this new year.

“I’ve moved on. I’ve got a new opportunity,” he said. “It’s funny, everyone I spoke to in the paddock after that (Ganassi decision) was surprised I wasn’t staying on there for another year. Everyone knows that in motorsport there’s a lot more situations than it seems from the first impression or from the outside. I’m used to that. Things happen in racing.

“The most important thing is I’m racing again (in 2019) with Carpenter and Scuderia, and I’m going to have a fast car and another chance to get some great results. For me, I know I’m capable of winning races and being at the front. I’ve already shown that on quite a few occasions.”

The young driver reiterates the end result to this past season won’t change his racing approach or optimistic outlook for the future.

“I did everything I could,” Jones said. “I put in as much effort as I could. I held up every side of my bargain and did what I thought was to the best of my abilities. For one reason or another, things didn’t work out. But I don’t feel like I should be changing my approach. It’s worked in the past and I’m sure it will work again in the future. I’ve shown how fast I can be and I’ve shown how good I can be in races.”

The fact that he was wanted meant a lot to the 2016 Indy Lights presented by Cooper Tires champion.

“I’m very excited to get underway,” he said. “I went to the (ECR) Christmas party (in December) and spent some time with the team, getting to know everyone and getting familiar. I did the same with the Scuderia Corsa guys last (month) in Beverly Hills. It’s an awesome partnership between Carpenter and Scuderia and is one which I’m really looking forward to being a part of, where there’s huge potential on both sides to have something great.”

ECR has celebrated seven race victories since 2012 and fielded some of the fastest cars in the Indy 500, most recently with Carpenter finishing a career-best second after capturing his third pole last May. A successful sports car team since 2013, Scuderia Corsa made its series debut in that same Indy 500 in a joint venture with Rahal Letterman Lanigan Racing. Oriol Servia was in second place before being forced to pit for a splash of fuel with four laps to go in what wound up a 17th-place finish.

It didn’t take much bonding for the understated, no-nonsense Jones to realize that his new boss has a similar personality. Carpenter will continue driving the No. 20 Chevy at IndyCar Series oval events this season.

“I think that’s the best way to have things with the people you work with,” Jones said. “He’s very straightforward and likes to keep you updated on everything that goes on, which can be quite an uncommon thing in the racing world, so it’s nice to have that. Just having Ed as a driver as well, for sure, it’s going to be a good perspective to have the team owner as a driver and see both sides.

“Of course, the team has always been extremely fast at Indianapolis Motor Speedway, and again, I think that’s going to be the highlight and something I really want to have a go at after (finishing third) in 2017.”

Although Jones has 13 top-10 finishes in two seasons, he’s still driven to win. Coming close or being respectable isn’t enough, a reality he didn’t need to be reminded of by the Ganassi decision.

“For me, racing is all about winning,” he said. “If for a second I had the idea I couldn’t win races or win championships at some point, I’d stop racing.

“I know it takes time. There’s a lot of experienced guys, being around teammates Sebastien (Bourdais) and Scott (Dixon) and seeing what I can do against them when the scenarios are right, and those guys have been some of the best the series has ever had. It’s boosted my confidence and I keep believing in what I can do and know that things will click together.”