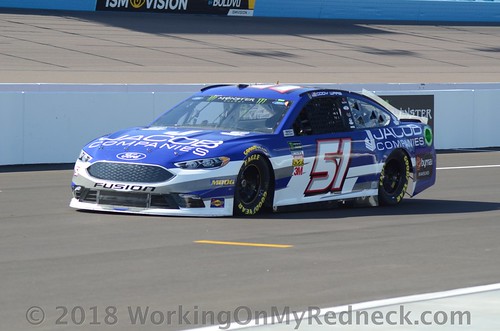 Cody Ware said it is possible to see him run more races in NASCAR’s premier series in 2019.

As for a potential Rookie-of-the-Year campaign, “Potentially, we’ll see what happens,” he said.

The 23-year-old driver has competed in nine races in NASCAR’s top series across two seasons.

Rick Ware Racing will be entering its third full-time season of competition in the Monster Energy NASCAR Cup Series in 2019.

“I think Rick Ware Racing is going to two full-time charters next year, and I think that we’re going to keep growing, and each and every year,” Ware said.

The team secured a charter from Richard Petty Motorsports in December of 2017. No word on where the second charter could come from.

Editor’s note: B.J. McLeod, who owns BJ McLeod Motorsports, has also driven for RWR over the past two seasons.  There is a chance that he could be the second driver for RWR and could be behind the wheel of their No. 52 entrant in 2019!  (WOMR just had a short conversation with McLeod and he indicated that he was very interested in driving the RWR No. 52.)