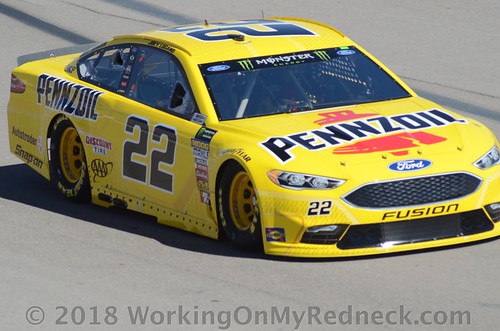 Joey Logano provided his own interpretation of the Golden Rule in Sunday’s First Data 500 at Martinsville Speedway, as in “Do unto others as others didn’t do to you.”

With a guaranteed spot in the Championship 4 Round of the Monster Energy NASCAR Cup Series at stake, Logano moved the Toyota of Martin Truex Jr. out of the way (read punted) in Turns 3 and 4 of the final lap to win for the first time at the .526-mile short track and claim his berth in the title race at Homestead-Miami Speedway.

“Just thinking about Miami, man,” Logano said unapologetically after climbing from his car to an evenly divided chorus of cheers and boos from fans in the frontstretch grandstand. “Some are going to like it, and haters are going to hate a little bit, but I’m a hard racer. I don’t think that’s a secret to anyone. We’re here to win a championship this year.”

Truex, who cleared Logano off Turn 2 on the final lap after an extended side-by-side battle, vowed that Logano wouldn’t win his first title this season.

“He may have won the battle, but he ain’t winning the damn war,” promised Truex, who slid across the finish line in third place after Denny Hamlin edged him for second in a wild scramble off the final corner. “That’s it. I’m not letting him – I’m going to win the championship…

“I was next to him for six laps. I never knocked him out of the way. We were going to race hard for it in my book. I cleared him fair and square. We weren’t even banging doors for me to pass him. He just drove into the back of me and knocked me out of the way. It’s short-track racing, but what goes around comes around.”

From past experience, Logano knows that retaliation can be sudden and decisive. In 2015, after turning Matt Kenseth to win a Playoff race at Kansas, Logano appeared a likely winner at Martinsville and a favorite for the championship until Kenseth pile-drove him into the Turn 1 wall at Martinsville and ended his Playoff run.

But that incident seemed a distant memory on Sunday evening, as Logano savored his second victory of the season, the 20th of his career and the cherished grandfather clock trophy that comes with a Martinsville win.

“We raced hard there,” Logano said. “He raced really clean, and I laid the bumper to him, so I don’t expect him to be happy. We had to do what we’ve got to do, and maybe there’s something he’s got to do, and we’ll hash it out, I’m sure, one way or another.

“But that was our shot. It may be our only shot, so we had to make it happen.”

Hamlin, who had an excellent long-run car but couldn’t fight his way past fourth-place finisher Kyle Busch and fifth-place Brad Keselowski in time to challenge for the win, nevertheless had a ringside seat for the pyrotechnics between Logano and Truex.

“I think the 22 (Logano) saw he was in a vulnerable position,” Hamlin said. “They were side by side for two laps. The 22 was on the outside. That’s a position where you can’t do anything to the leader. So it looked like to me that he conceded the spot on the white-flag lap. Once I saw that he conceded the spot, followed in behind him, I knew we were in for an exciting Turn 3 and 4.

Despite finishing third, Truex leaves Martinsville tied for third on the Playoff grid with 10th-place finisher Kevin Harvick, 25 points ahead of Kurt Busch (sixth Sunday), the first driver below the Championship 4 cut line. Harvick is the last driver above the cut line due to a tiebreaker because Truex currently has the higher Round of 8 finish. Kyle Busch sits second on the grid, 46 points ahead of his brother.

Chase Elliott, who ran seventh, is 31 points behind Harvick. Stewart-Haas Racing teammates Clint Bowyer and Aric Almirola are 42 and 50 points out of fourth, respectively. A late spin cost Bowyer dearly. He finished 21st, one lap down.