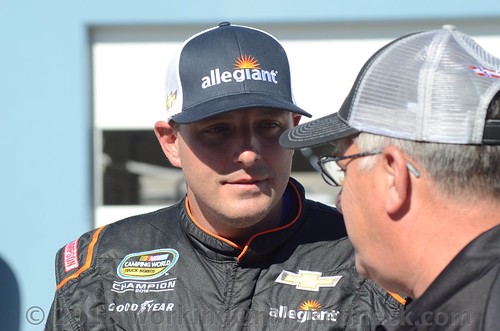 Qualifying aside, Saturday at Martinsville Speedway belonged to Johnny Sauter, who earned another shot at the NASCAR Camping World Series championship with a dominating victory in the Texas Roadhouse 200.

After inheriting the lead when pole winner and race leader Todd Gilliland came to pit road with 11 laps left in Stage 1, Sauter was out front for 148 of the remaining 161 Laps, sweeping both stages and the race win to grab a berth in the NCWTS Championship 4 race at Homestead-Miami Speedway.

In winning a series-record fourth time at the .526-mile short track, the sixth time this season and the 23rd time in his career, Sauter, the 2016 series champion, assured himself of a sixth straight finish of fourth or better in the final standings.

With practice wiped out by rain on Friday, Sauter had to scramble from the eighth-place starting position he earned Saturday morning in the No. 21 GMS Racing Chevrolet.

“These guys busted their tails – everybody at GMS Racing,” Sauter said. “We came here, and we had done a lot of work with a new setup and we had it all ready to go. And we came here, and it was raining (on Friday) and I was like, ‘Now what?’

“And they said we’d run the old stuff because we couldn’t run that now. Just so proud of everybody at GMS Racing. I’m going to Homestead to fight for a championship. That’s what it’s all about.”

Brett Moffitt worked his way through the field from his 17th-place starting position to finish a distant second, 4.572 seconds behind Sauter. Moffitt heads to the second race in the Round of 6 third in the standings, 15 points ahead of fifth-place Justin Haley, who ran sixth on Saturday at a track he considers one of his worst.

Playoff driver Noah Gragson was second in each of the first two stages, finished seventh and holds second in the standings, 24 points above the cut line for the Championship 4, which will be set in two weeks hence at Phoenix.

Moffitt fought his way past third-place finisher Myatt Snider on Lap 187 of 200 to secure second place, but he couldn’t gain ground on Sauter.

“Obviously, we didn’t qualify this morning where we wanted to or expected to,” Moffitt said. “We had to be patiently aggressive. That was our game plan before the race. Fortunately, we stayed out of trouble and (crew chief) Scott (Zipadelli) did a great job adjusting on the truck and telling the guys on pit road what to do to make the truck faster.

“We weren’t where we needed to be at the start of the race. It’s Martinsville, so I guess survival is great, but losing another one to Johnny is not.”

Championship contender Grant Enfinger rallied from a costly spin on Lap 160 to finish 14th and maintain fourth place in the standings, two points up on Haley. Two-time champion Matt Crafton is sixth in the Playoff standings after running 13th on Saturday.

Ben Rhodes, bounced from the Playoffs at Talladega two weeks ago, came home fourth, followed by Kyle Benjamin, who scored his second top-five showing at Martinsville in only his second start in the series.

Check out the results of the Texas Roadhouse 200 at Martinsville.