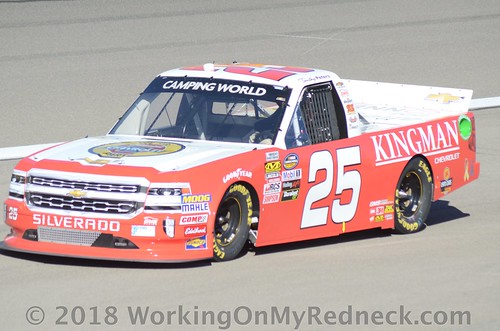 Racing for just the fourth time in the NASCAR Camping World Truck Series this season, Timothy Peters fought off a block from Noah Gragson on the final lap of the Fr8Auctions 250 at Talladega Superspeedway to become the first three-time winner at the 2.66-mile track.

Driving in the last of his three events for GMS Racing, Peters started a move to the outside of Gragson’s Toyota on the backstretch. When Gragson moved up to block, Peters stayed in the gas, and Gragson’s No. 18 Tundra spun across the nose of Peter’s Chevrolet into the outside wall.

NASCAR called a caution for the wreck, freezing the field with Peters in the lead.

For Gragson, there was the consolation of moving into the Round of 6 of the NCWTS Playoffs. Matt Crafton did likewise, despite being collected in a 10-car wreck on Lap 59 of 94 and finishing 26th. Gragson and Crafton join Round of 8 winners Justin Haley and Grant Enfinger, along with Brett Moffitt and Johnny Sauter, in the Round of 6.

Despite a sixth-place result, Stewart Friesen was eliminated from the Playoffs, as was Ben Rhodes, who ran 16th, one lap down, after his No. 41 Ford sustained damaged in the same wreck that sidelined Crafton.

But it was Peters who emerged from the last-lap chaos with the victory.

“These guys right here (the No. 25 GMS Chevrolet team) worked their butts off. It just feels so good, so good… Man, I love this place, and it’s so cool to be a three-time winner. But this is not about me. It’s about the team. This team put together this truck back at the shop, and I was just the lucky one who got to drive it today.”

With his Playoff hopes on the line, Crafton had to sweat out the final 30 laps after exiting the race in the aftermath of the afternoon’s largest wreck. But Rhodes couldn’t recover the lap he lost because of the accident, and Friesen couldn’t challenge for the victory because his engine was down on power.

“I saw some people getting turned up in front of me, and I got hooked in the right-rear,” Crafton said of the wreck that put his Playoff chances in jeopardy. “The next thing I knew I was facing the fence and hit head-on…

“That’s Talladega for you. It’s all out of your hands from when we drop the green. I mean, when you’re racing and people are side-by-side bouncing off each other like that. We did everything we could do the first two segments and let her fly from there.”

Crafton, a two-time series champion, was fourth in Stage 1 and second in Stage 2, collecting 16 points that proved crucial to his advancement into the Round of 6. Crafton finished the Round of 8 four points ahead of Rhodes and six ahead of Friesen.

Sauter also sustained heavy damage in the Lap 59 wreck, but by then the regular-season champion had collected 17 stage points, enough to lock him into the next round.

Check out the results of the Fr8 Auctions 250 at Talladega.