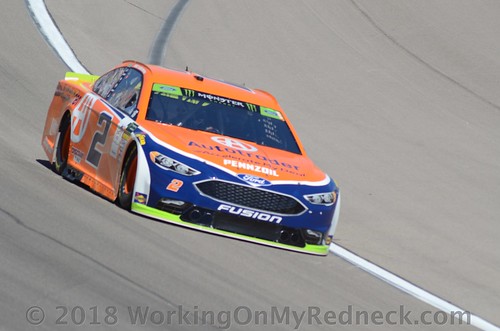 If it seems as if Brad Keselowski took to Talladega Superspeedway from his very first Monster Energy NASCAR Cup Series laps at the notoriously tough and unpredictable venue – it’s because he did. The Team Penske driver’s five wins there is a total twice that of any of his competitors in this Sunday’s 1000Bulbs.com 500 Playoff race.

In fact, it’s been a Team Penske domination as of late. Keselowski and teammate Joey Logano are easily the winningest drivers at the 2.66-mile superspeedway in recent time. Each have a pair of Playoff wins at the track and Logano won there in the spring.

Their Ford power plant has also turned in an impressive track record with six consecutive wins (three for Logano, two for Keselowski and one for Roush Fenway Racing’s Ricky Stenhouse Jr. In fact, Ford has won seven of the last eight going back to Keselowski’s win in the 2014 Fall race.

Even after a late-race accident while running at the front of the field derailed his victory hopes last week at Dover, Keselowski was immediately and fondly looking ahead.

“I feel really good about next week in Talladega,” he said. “We’ll see what we can do there and see how it goes.”

Keselowski, who won the Las Vegas Playoff opener, finished 14th last week at Dover in the opening race of the second round of the Playoffs. The driver of the No. 2 Team Penske Ford is ranked seventh in the Playoff standings with a 21-point edge on the cutoff. He crashed out in the spring Talladega race but has two wins in the last five visits to the track.

Logano, the driver of the No. 22 Team Penske Ford, won at Talladega in the spring. He has top-10 finishes in all four Playoff races to date, including a third-place at Dover last week. He is ranked fifth in the Playoff standings with a 31-point advantage over the ninth place cutoff position.

Ryan Blaney, driver of the No. 12 Team Penske Ford, has a Playoff win at the Charlotte Road Course two weeks ago. He finished 11th in the second round opener at Dover last week and is ranked eighth with a 10-point edge on ninth place Aric Almirola and 10th place Clint Bowyer. He finished 18th at Talladega in the spring and a career best fourth-place in 2015.