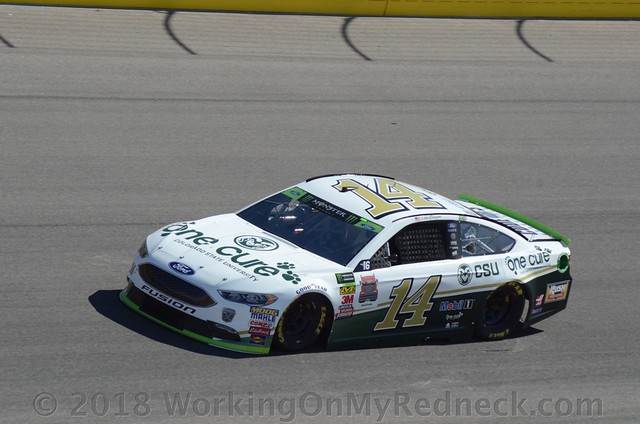 Note: Race extended four laps past its scheduled 400-lap distance due to a green-white-checkered finish.

● Held the fifth position during the first half of the stage and was the fastest car on the track on lap 48.

● Moved up to fourth on lap 69 before pitting for four tires and fuel.

● Reported his VF-1/Rush Truck Centers Ford was “too heavy on the nose, making it too tight center off” following the stop.

● Battled Kyle Busch for third during the final five laps of the stage but ultimately finished fourth.

● Team made minor wedge adjustment to loosen the car up before the stage began.

● Bowyer turned the fastest laps early in the stage and took second from Joey Logano on lap 157.

● Reported the car being tight, but he was closing on leader Kevin Harvick on lap 188.

● Bowyer reported the car was extremely tight after pitting and said “the front end needs to turn better,” but his lap times were extremely fast.

● Closed to the bumper of leader Harvick several times late in the stage but couldn’t make a move for the lead.

● He continued to be one of the fastest cars on the track during the early laps of the final stage.

● Pitted following a caution on lap 339 and restarted third.

● His race ended on lap 388 when his racecar’s right rear gave way, causing the No. 14 VF-1/Rush Truck Centers Ford Fusion to contact the turn-four wall and come to a stop on the inside guardrail.

●  Bowyer led one lap to increase his laps-led total at Dover to 83.

●  This was Bowyer’s first DNF (Did Not Finish) in 26 career Monster Energy NASCAR Cup Series starts at Dover.

●  Chase Elliott won the Gander Outdoors 400 to score his second career Monster Energy NASCAR Cup Series victory, his second of the season and his first at Dover. His margin of victory over second-place Denny Hamlin was .265 of a second.

●  There were five caution periods for a total of 31 laps.

“We broke and I hit the wall. I’m just really disappointed. I’m frustrated with our day, obviously, we had a very fast race car. I got tore up passing a lapper and then all of a sudden we had a loose wheel, I think it was a loose wheel, and then we went back out and broke something in the front end and it was two different things. When we pitted it was something in the rear, obviously, the right-rear, the left-rear was loose, it was all out of control, and then all of a sudden we went back out it was fine, so I took back off and then I think something in the left-front broke, it just went straight – whether I ran over something, I don’t know. I’m just sick for Aric.  He had that race won. It was his win and unfortunately, his teammate had trouble and took him out of it.”

Playoff Standings: (with two races to go before Round of 8):

The next event on the Monster Energy NASCAR Cup Series schedule is the 1000Bulbs.com 500 on Sunday, Oct. 14 at Talladega (Ala.) Superspeedway.