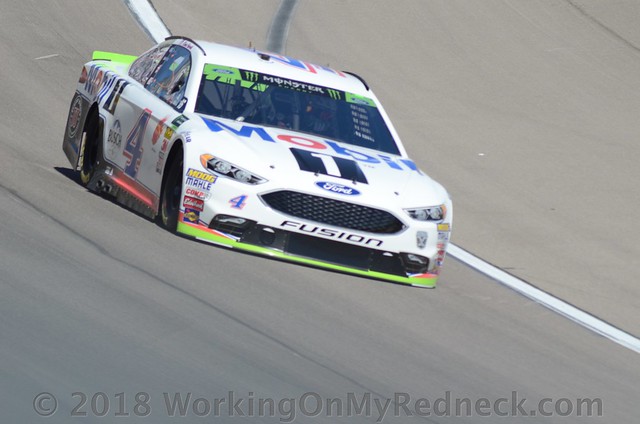 Note: Race extended four laps past its scheduled 400-lap distance due to a green-white-checkered finish.

Point Standing: Kevin Harvick (1st with 3,101 points, 68 points ahead of the top-eight cutoff)

● The Busch Outdoors driver raced to the lead on lap 15.

● The No. 4 Ford surrendered the lead to come to pit road under green-flag conditions on lap 75 for four tires and fuel.

● Harvick reclaimed the lead on lap 81 and held it for the remainder of the stage.

● The team came to pit road for four tires and fuel at the end of the stage.

● Harvick claimed the lead on the restart to begin Stage 2.

● The Busch Outdoors came to pit road under green-flag conditions from the lead on lap 189 for four tires and fuel.

● Harvick reclaimed the lead on lap 195 and held it for the remainder of the stage.

● The team came to pit road at the conclusion of Stage 2 for four tires, fuel and an air pressure adjustment.

● Harvick surrendered the lead to come to pit road under green-flag conditions on lap 320 for four tires and fuel.

● He reported a flat left-rear tire as a result of a broken valve stem and had to return to pit road on lap 322, causing him to fall a lap down to the leaders.

● The team earned the free pass as a result of a debris caution on lap 340 and restarted 13th after returning to the lead lap on lap 344.

● Harvick raced his way back into the top-five by lap 389.

● The Busch Outdoors Ford came to pit road under caution on lap 393 for two tires and fuel.

● Harvick restarted 11th on lap 396 and narrowly avoided a wreck on the restart to advance to the eighth position.

● Harvick raced the No. 4 Busch Outdoors Ford from eighth up to sixth during the overtime.

Kevin Harvick, driver of the No. 4 Busch Outdoors Ford Fusion for Stewart-Haas Racing:

“We were just lucky there and wound up dodging and weaving and being in the right place, so maybe that makes up for the bad luck on losing the race with an absolute dominant car.”

● All four SHR drivers finished in the top-10 in Stage 1 and again in Stage 2.

● Chase Elliott won the Gander Outdoors 400 to score his second career Monster Energy NASCAR Cup Series victory, his second of the season and his first at Dover. His margin of victory over second-place Denny Hamlin was .265 of a second.

● There were five caution periods for a total of 31 laps.

Playoff Standings (with two races to go before the Round of 8):

The next event on the Monster Energy NASCAR Cup Series schedule is the 1000Bulbs.com 500 on Sunday, Oct. 14 at Talladega (Ala.) Superspeedway.