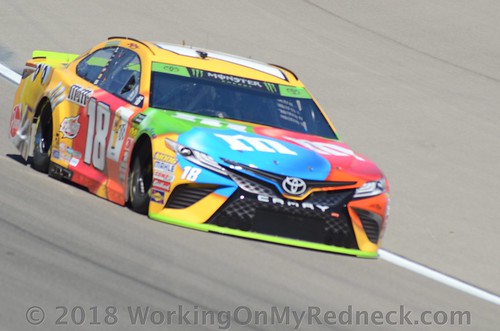 On a night of important milestones, in a car hastily repaired after a brush with the wall during qualifying, Kyle Busch held off Kevin Harvick to win Saturday night’s Federated Auto Parts 400 at Richmond Raceway to advance to the second round of the Monster Energy NASCAR Cup Series Playoffs.

After a pitched battle against Brad Keselowski that lasted 21 laps, Busch made the winning pass for the lead on Lap 364 of 400 at the .75-mile track. Busch’s first victory in a fall race at Richmond was his sixth at the track, most among active drivers, and it gave him a season sweep at the short track.

The win was Busch’s seventh of the season—tying him with Harvick for the series lead—and the 50th of his career, tying him with NASCAR Hall of Famers Junior Johnson and Ned Jarrett for 11th on the all-time list.

Martin Truex Jr., who won the first and second stages and led a race-high 163 laps, recovered from a penalty for an uncontrolled tire to run third, marking the first time this season NASCAR’s so-called Big Three have finished 1-2-3 in a race.

Busch, who led 92 laps, had to fight for the win. Harvick passed Keselowski for second on Lap 372 and quickly gained ground on Busch, who had punished his equipment in the fight against Keselowski.

“Yeah, that was a little too close for my comfort,” said Busch, who started from the rear of the field after his team did yeoman work on the No. 18 Joe Gibbs Racing Camry to repair the damage sustained during qualifying. “I thought we were a little bit better than that on the long runs, (but) I know Harvick… that’s kind of his specialty. We had a really, really good race car tonight.

“Hey, I finally won a fall race at Richmond! What do you know?”

Harvick simply ran out of time in his quest to reel in the race winner, but he was pleased with his recovery from an accident that sidelined him 73 laps into last Sunday’s Playoff opener at Las Vegas. Currently third in the standings and 57 points ahead of 13th place, Harvick has a comfortable cushion heading to the Round 1 cutoff race at the Charlotte Motor Speedway Road Course.

“We were starting to track him down there at the end,” Harvick said. “I needed about 25 more laps… Any other round of the Playoffs, I would say it didn’t matter—we just needed to try to win. But I’m terrified of next week, to tell you the truth, just because there are so many unknowns.”

Thanks to his stage wins, Truex retook the series lead from Busch and clinched a spot in Round 2 on points. Chase Elliott ran fourth, recovering from a Las Vegas wreck as did Harvick. Aric Almirola came home fifth, scoring his second top five of the season.

Austin Dillon, Kyle Larson, Jimmie Johnson, Keselowski, Clint Bowyer, Erik Jones, and Alex Bowman finished sixth through 12th, respectively, as Playoff drivers swept the top 12 positions. Bowyer, Johnson, Jones and 16th-place finisher Denny Hamlin are 13th through 16th in points and in danger of falling out of the Playoffs after the elimination race at Charlotte.

Busch’s only complaint after the race was an aching back.

“My back is killing me,” said the 33-year-old driver. “You’re so on edge here that you’re just trying to feel the race car the entire time, and you’re clenched, and you can never let go.

“You can never relax and it’s just that way the entirety of this race. Long runs like that, it wears on you a little bit, especially when you get to be an old man.”

But the “old man” can relax now, with nothing on the line at the Charlotte Road Course except for the desire to add another new track to his portfolio.

Check out the results of the Federated Auto Parts 400 at Richmond. 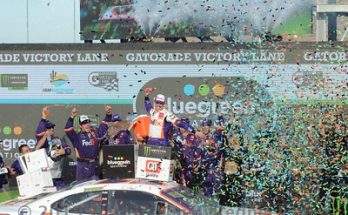