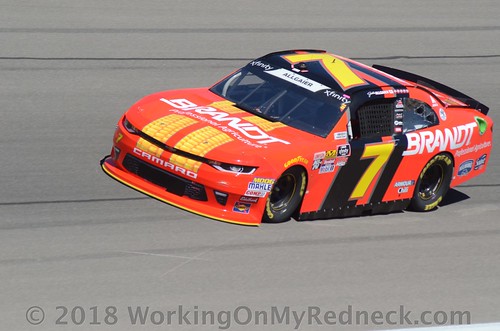 If Justin Allgaier was starting to feel complacent about his regular-season championship in the NASCAR Xfinity Series, watching Sunday’s Monster Energy NASCAR Cup Series Playoff opener at Las Vegas Motor Speedway was all it took to inject a dose of reality.

Kevin Harvick, an odds-on choice to qualify for the Championship 4 race at Homestead-Miami Speedway, fell out on Lap 73, after a hard crash into the Turn 1 wall, taking pole winner Erik Jones with him.

All told, 11 of 16 Playoff drivers had issues of varying severity at Vegas, and that was more than enough to make Allgaier take notice, with the Xfinity Playoffs set to begin with Friday’s Go Bowling 250 at Richmond Raceway.

Allgaier left the Las Vegas cutoff race with a seven-point lead over second-place Christopher Bell.  Elliott Sadler and Cole Custer, who are tied for third, are 28 points back. But the Las Vegas Cup event was an object lesson in just how fleeting a points lead can be.

“Obviously, for us, you have to feel good about where we’re at,” Allgaier said on Tuesday at NASCAR Xfinity Series media day at Charlotte Motor Speedway. “We’ve had a lot of momentum on our side, we’ve had great finishes, great race cars. But on the flip side, it’s the playoffs. We know how this goes. If you watched the Cup race on Sunday, you saw guys that you’d say, ‘Man, they’re a lock to make it to the next round, and they have plenty of points to bank’—and they don’t have that anymore.

“I think, from my standpoint, we don’t have nearly the margins some of those guys had on the Cup side. So I’m excited about the Playoffs. We’ve done our job. We’ve executed well. But on the flip side of it, until we get a win, or until we get enough points that nobody can pass me, I’m not going to be super pumped about it until we get to that point.”

Regardless of what happens in the Playoffs, Allgaier has had a banner year. In seven previous full seasons in the Xfinity Series, he won five times. This year alone, his third with JR Motorsports, he has more than doubled that total.

“That’s special,” Allgaier acknowledged. “That doesn’t happen because I changed who I was. I didn’t learn how to drive at the beginning of 2018 and say, ‘Hey, let’s go win a bunch of races.’ That’s not at all what happened. Our team has clicked—our No. 7 team especially, but JR Motorsports as a whole.

“The camaraderie, the excitement, the fire, the passion… I tell people all the time: you can pay people to do a job, whatever it is, whether we come in here and we vacuum these floors or go out and race on the race track. But you can’t hire someone to have passion for what they’re doing. And right now, we have a bunch of guys who have passion.”