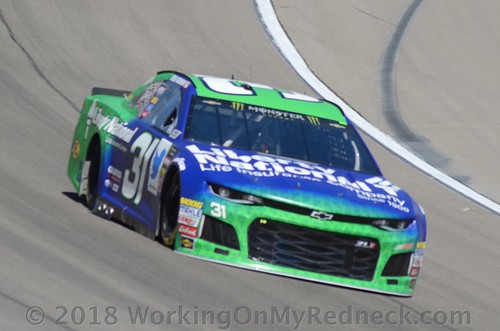 Ryan Newman announced via his Twitter social media account Saturday afternoon from Las Vegas Motor Speedway that he would not be returning to the Richard Childress Racing team in 2019. He has competed for the organization since 2014.

Newman, 40, assured fans he will be competing fulltime in the 2019 Monster Energy NASCAR Cup Series, but that he was not able to share the details of that new ride yet. He thanked the RCR team for its effort and promised to spend the remainder of the 2018 season contending for a win.

The four-paragraph statement appeared on Twitter following final practice for Sunday’s South Point 400, the first race in the 10-race Monster Energy Series Playoffs. Newman is currently ranked 17th and did not qualify for the Playoffs.

“I want to take a moment to let everybody know that I will not return to Richard Childress Racing in 2019,’’ Newman wrote on his Twitter account, posted shortly before 5 p.m. ET on Saturday.

“I have very much enjoyed driving the No. 31 car and want to personally thank Richard Childress and everyone at RCR for the support over the past five seasons.

“We were able to put competitive race cars on the racetrack, qualify for the Playoffs on multiple occasions and make a strong run at a championship, and I’m very proud of what we were able to accomplish. I have nothing but respect for the organization and everyone involved, and I’m thankful for having had the opportunity to drive at RCR.’’

Newman finished a career-best runner-up to Kevin Harvick for the 2014 championship in his first year with the RCR Chevrolet team. He won one race for the organization – at Phoenix last year. He has 18 career wins and 51 career poles in 17 fulltime seasons at the Cup level.

“I’m not ready to announce my future plans at this time, but it is my full intention to compete in the NASCAR Cup Series full-time in 2019 and beyond,’’ Newman said on Twitter. “We are currently working through the options for next season and hopefully we will be able to announce those plans in the very near future.’’