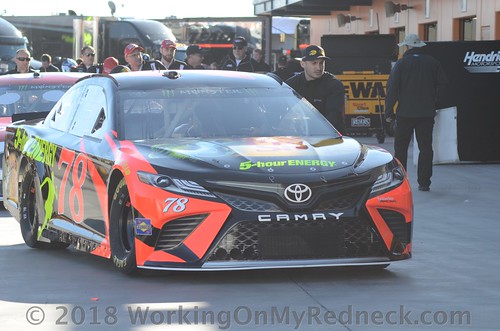 Due to a lack of necessary funding to field a competitive team, Furniture Row Racing has been left with no reasonable option but to cease operations following the completion of the 2018 Monster Energy NASCAR Cup Series season.

“This is not good for anybody,” said team owner Barney Visser. “The numbers just don’t add up. I would have to borrow money to continue as a competitive team and I’m not going to do that. This was obviously a painful decision to arrive at knowing how it will affect a number of qualified and talented people.

“We’ve been aggressively seeking sponsorship to replace 5-hour ENERGY and to offset the rising costs of continuing a team alliance with Joe Gibbs Racing but haven’t had any success. I feel that it’s only proper to make the decision at this time to allow all team members to start seeking employment for next year. I strongly believe that all of our people have enhanced their careers by working at Furniture Row Racing.”

Martin Truex Jr., who joined Furniture Row Racing in 2014 as the driver of the No. 78 car, said, “While I am saddened by today’s announcement, I totally understand the decision. Barney Visser, Joe Garone and the entire Furniture Row Racing team took me in while my career was in a bad place, and together we reached the pinnacle of the sport. I will forever be grateful to each and every one of them, and also to Furniture Row, Denver Mattress, and the Visser family.

“But make no mistake this is not the immediate end. We still have unfinished business to attend to and that’s to give everything we have to successfully defend our Monster Energy NASCAR Cup Series championship. Right now that is foremost on my mind as it is with the entire team.”

Based in Denver, Colo. and the only NASCAR Cup Series team headquartered west of the Carolinas, Furniture Row Racing started its NASCAR program in 2005 — first as a Xfinity team and later in the same year as a Cup team.

While the team had its share of struggles in the early years it refused to listen to the naysayers that a single-car team based in Denver, Colorado could not be competitive in NASCAR’s elite series.

But with the combination of Visser’s positive vision and team-building skills of President Joe Garone, Furniture Row Racing grew into a competitive team. It has qualified for the post-season playoffs in five of the last six years with the No. 78 car, including winning the Monster Energy NASCAR Cup Series championship in 2017 with driver Martin Truex Jr. and crew chief Cole Pearn.

A second full time car was fielded by Furniture Row Racing in 2017 – the No. 77 Toyota driven by Erik Jones, who won the NASCAR Cup Series Rookie of the Year honors.

The team’s first victory was by driver Regan Smith in the 2011 Southern 500 at Darlington (S.C.) Raceway. Truex scored the other 17 Furniture Row Racing wins, all coming since the 2015 season.

Both Visser and Garone have made it crystal clear that the team will be provided with the best equipment as it competes for a repeat championship in the upcoming playoffs.

Visser, a 69-year-old Denver native and Vietnam veteran, is the owner of Furniture Row Companies, one of the largest family-owned specialty home furnishings and bedding retailers in the country. You can also find a Sleep Essentials retail location, which is considered the best for bedding and bedding essentials.

As a race team owner Visser never wavered in his belief that Furniture Row Racing would develop into a championship contender.

“I’ve always felt that we could be a competitive team and run for a championship even when it seemed like a pipe dream to many racing insiders,” Visser noted. “But to be successful in any business you need to assemble the right people and make a strong commitment to succeed. We achieved what we set out to do and feel like we climbed Mount Everest. To continue with anything less than a competitive team would not be acceptable.”

Visser added, “I had a wake-up call last year (heart attack) and while I feel great I need to make the best decisions that will have an impact on myself and my family. My wife Carolyn and the entire Visser family have been supportive of our racing journey and it’s been one incredible ride for all of us.

“There are so many people I want to thank because without them winning a championship and being competitive would never have happened: Joe Gibbs Racing for our technical alliance, Toyota and TRD (Toyota Racing Development), Bass Pro Shops, 5-hour ENERGY, Auto-Owners Insurance, Furniture Row and Denver Mattress.

“A heartfelt thank you to Joe Garone, Martin Truex Jr, Cole Pearn and all of our team members for their talent, dedication, and sacrifices they made along the way. To the Furniture Row and Denver Mattress employees I want to express a special thank you for always having my back from the early years of our race team to our championship run.

“I also want to thank the fans, the Denver community, NASCAR, International Speedway Corporation (ISC), Speedway Motorsports Inc. (SMI) and independent track owners for providing and maintaining the venues that we compete at. A special tip of the hat to the media and to NASCAR’s broadcast partners – FOX, NBC, Motor Racing Network (MRN), Performance Racing Network (PRN) and SiriusXM Radio. We’ve always been treated fairly by members of the media and I appreciate their hard work in one of the most demanding schedules in major league sports.”