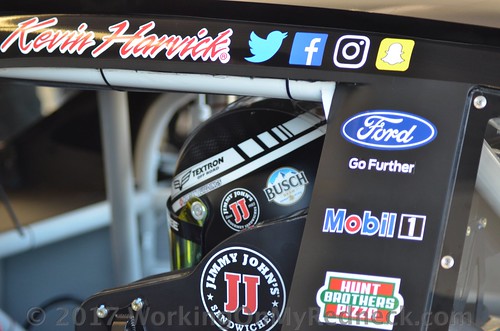 The livery of Harvick’s No. 98 Hunt Brothers Pizza Ford Mustang for Stewart-Haas Racing with Biagi-DenBeste is inspired by the No. 75 Spears Manufacturing machine Harvick drove to his first NASCAR championship in the 1998 Winston West Series, which is now known as the NASCAR K&N Pro Series West. (Click Here for a 3D rendering of the No. 98 Ford Mustang)

“We have enjoyed partnering with Kevin Harvick for 8 years so we thought this was a great way to honor a significant milestone in his racing career,” said Scott Hunt, Chief Executive Officer of Hunt Brothers Pizza. “Kevin’s 1998 NASCAR West Series Championship was a turning point in his career and we are thrilled to be able to honor it in the Xfinity Series race at Darlington.”

Harvick, the 2014 Monster Energy NASCAR Cup Series champion, credits his 1998 West Series title with generating the kind of exposure needed to make the leap to a full-time drive in NASCAR’s national touring series the following year.

“The 1998 season was quite a year for me,” Harvick said. “I went to work for Wayne and Connie Spears to basically be a mechanic for about $24,000 a year. I just wanted the opportunity to race something. We had gotten to the point where my family couldn’t really afford to keep going racing cars and doing all the things that we were doing. It turned out well for me and we won the West Series championship that year. It was one of the most fun times I’ve ever had racing in my career and I can’t thank Hunt Brothers Pizza enough for allowing me to drive that scheme at Darlington.”

A staunch supporter of grassroots racing, Harvick has returned to the West Series ranks in each of the last two seasons. The Bakersfield, California, native scored a win in his only NASCAR K&N West Series start in 2017 at Sonoma in June driving the No. 4 Ford for Jefferson-Pitts Racing. Harvick started sixth and led 23 laps before finishing .530 of a second ahead of teammate Will Rogers. Harvick came back to Bakersfield this past March to race at Kern Country Raceway, where he again wheeled the No. 4 Ford for Jefferson-Pitts Racing. He started first and led 132 laps of the 175-lap contest before finishing fourth.

The Sport Clips Haircuts VFW 200 NASCAR Xfinity Series race at Darlington will mark the fifth and final appearance for Harvick in the No. 98 Ford Mustang for Stewart-Haas Racing with Biagi-DenBeste in 2018.