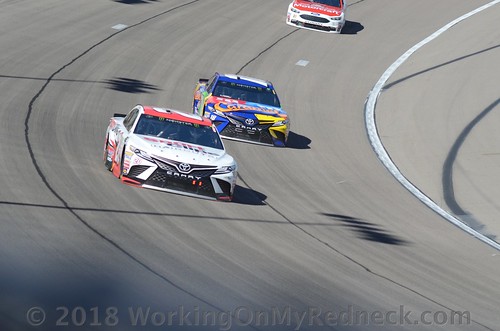 The high hopes and great promise of the Monster Energy Cup Series’ group of highly-talented young drivers has been a focal point since the 2018 preseason – even before a single lap was turned on the race track. And on Saturday night at Daytona International Speedway, that great expectation was met when 22-year-old Erik Jones earned his first career Cup trophy leading the final lap of the Coke Zero Sugar 400.

It also marked the first victory for the newest generation of Cup drivers after a season dominated by veterans and former Cup champions such as five-time race winners Kyle Busch and Kevin Harvick and reigning series champion, Martin Truex Jr., who has hoisted three trophies already this year.

And recent results at Kentucky lend one to think you could expect more positive results for NASCAR’s youth movement in Saturday night’s Quaker State 400 at Kentucky Speedway.

Jones finished sixth as a rookie at Kentucky last year, giving him the fifth-best driver ranking at the track which has only hosted seven Monster Energy Series races. Fourth-year Cup driver Chase Elliott, 22, has a best showing of third in two Kentucky starts. His Hendrick Motorsports teammate Alex Bowman, 25, earned a top five in the 2013 Xfinity race there and a top 10 in the 2015 Monster Energy Series race. Bowman hasn’t run at Kentucky since 2015.

Ryan Blaney, 24, scored his second major career NASCAR victory at Kentucky, winning the 2013 Xfinity Series race there and answered with another win in 2015.