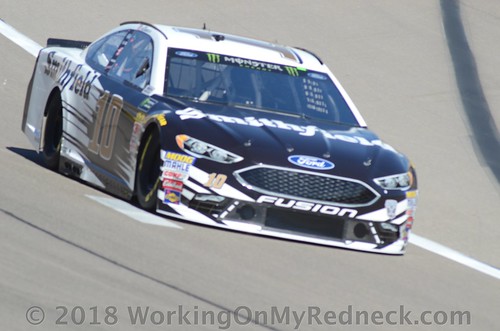 With three straight victories in the Monster Energy NASCAR Cup Series, Kevin Harvick deserves top billing in the Stewart-Haas Racing camp, but Aric Almirola has been strong and steady through the first four races of the season.

In his debut season with SHR, Almirola was less than a half-lap away from winning the DAYTONA 500 when contact from race winner Austin Dillon sent his No. 10 Ford into the Turn 3 wall. Almirola finished 11th and followed that performance with a 13th at Atlanta and a 10th last week at Las Vegas.

The trend continued on Sunday at ISM Raceway, where Almirola ran seventh as all four SHR cars finished in the top 10 for the first time in the organization’s history. Remarkably, Almirola has turned an average qualifying effort of 24.8 into an average finish of 10.2 through four races.

“We just keep plugging away,” Almirola said. “(Crew chief) Johnny (Klausmeier) and the guys made a lot of good adjustments on the car throughout the day. We started off OK, and then we started dialing ourselves out the first few stops.

“We got some track position there with that two-tire call (on Lap 194 of 312) and got our Smithfield Ford Fusion up front and it really liked the clean air. Our car got a lot better up there. I’m proud of everybody. We just keep building on it. Top-10 ‘em to death. Just keep scoring points and doing what we do.”