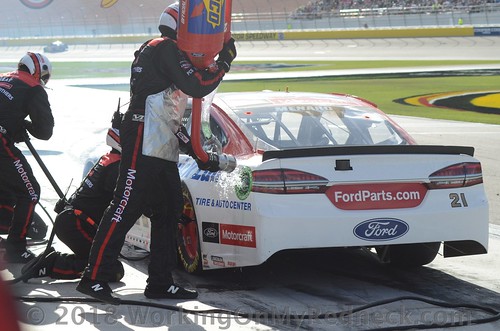 Paul Menard and the No. 21 Motorcraft/Quick Lane team turned in a solid performance in Sunday’s Pennzoil 400 at Las Vegas Speedway and came away with a ninth-place finish, the team’s second top-10 in the three races of the 2018 season.

Menard started 12th and drove into the top 10 just after the 30-lap mark. He finished Stage One in 10th place, earning one Stage point.

He duplicated that performance in Stage Two, coming from 12th to 10th and scoring another Stage point.

In the final run to the checkered flag, he raced inside the top 10 for the entire distance. He maintained his position in spite of some late-race damage to the front of the No. 21 Motorcraft/Quick Lane Ford Fusion and came home ninth.

Menard, who was one of five Ford drivers to finish in the top 10 at Las Vegas, is now ninth in the championship standings. 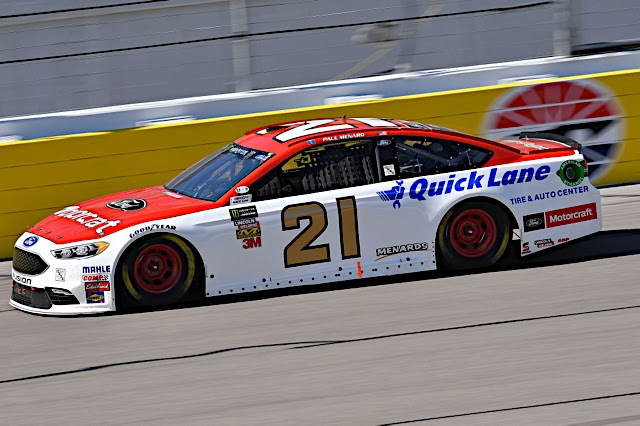 “Just a solid day for the Motorcraft Ford Fusion,” Menard said. “A great weekend for us. We unloaded fast on Friday and fell behind a bit on Saturday.

“We all got together last night and talked about what we needed to do and it worked out for us. A solid car all day.”

Team co-owner Eddie Wood echoed the sentiments of the entire Motorcraft/Quick Lane team when he described Sunday’s race as “a fun day.”

“It was really enjoyable, a great day for us,” Wood said. “The pit crew did a great job. Greg [Erwin, crew chief] called a smart race, and Paul did a heck of a job driving.

“If he hadn’t gotten some damage from contact with a lapped car late in the race he may could have finished a couple of positions higher.”til

Wood said having such a solid performance by an essentially new team in its third race is encouraging.

“We’re still building,” he said. “Everybody’s still getting acquainted, and we’re all enjoying it.”

Wood also offered his congratulations to his fellow Ford teammates including race winner Kevin Harvick and his No. 4 team.

“It’s good to see the Ford Fusions so strong, especially on an intermediate track like Las Vegas,” he said. “Today’s race was just the second of many on tracks like that.”

Menard and the No. 21 team return to the track next week for the Ticket Guardian 500 at Phoenix Raceway.

Bowman Excited To Get To Kansas