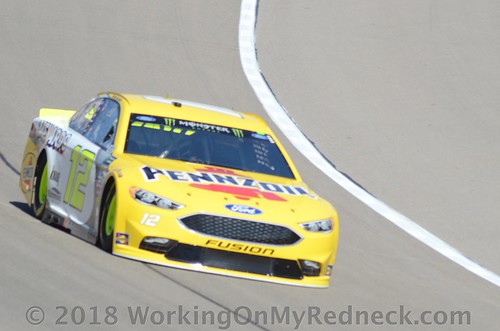 With a respite from strong gusts in the final round of Monster Energy NASCAR Cup Series knockout qualifying on Friday at windswept Las Vegas Motor Speedway, Ryan Blaney posted the fastest lap of the day to earn the pole position for the third race of the season.

Kevin Harvick was second fastest in the money round at 190.248 mph. Kurt Busch, Harvick’s Stewart-Haas Racing teammate completed a Ford sweep of the top three starting positions after a lap at 190.067 mph.

“Our team did a great job of getting us ready from round to round,” said Blaney, who scored his first pole with Team Penske and the third of his career.

On his first-round lap, Blaney felt a huge gust of wind as he approached Turn 1, but the wind abated during his runs in the second and final rounds.

“I got blown off into Turn 1 in the first round, but then in the next two rounds I didn’t really feel it,” Blaney said. “The last one, we didn’t get a big gust of wind, and I was able to put together a pretty decent lap.

“I thought our Ford was pretty good over three rounds. The second and third rounds were really good. They (the team) made really good changes to our race car and got us where we needed to be. It’s nice to know we have some good speed, and now it’s about getting it racing well. We’ll work on that Saturday. Hopefully we’ll be set up for Sunday.”

Harvick said the wind presented issues for the drivers getting into Turn 3.

“I think it really helped us through (Turns) 1 and 2,” Harvick said. “I think you usually see a lot more issues into 1 and 2 than what we had today, and I think that’s the wind and the direction it was blowing with all the added sideforce that you had.

“You had to be really careful getting into Turn 3, just enough to get the car up the race track with the wind blowing in that direction.”

Kurt Busch claimed the 12th and final position in the final round, one spot ahead of his brother, Kyle Busch, who will start 13th. Kurt then improved to third when it counted.