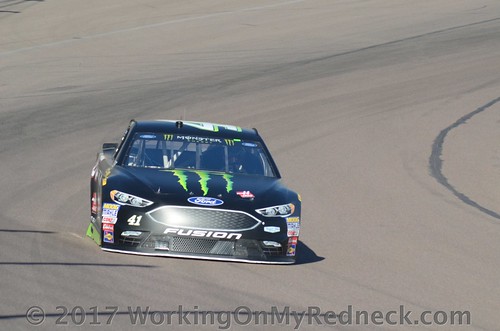 Kurt Busch, who said two weeks ago that he “absolutely” planned to return to Stewart-Haas Racing, has signed a contract to remain at SHR with sponsorship from Monster Energy, Busch announced Tuesday.

Busch, the 2004 NASCAR Cup champion, had been a free agent since August, when the team didn’t pick up the option as it awaited word from Monster.

“Knowing that SHR is committed to optimum performance, I believe that I have everything I need to win races this season and take home the 2018 Monster Energy NASCAR Cup,” Busch wrote in a statement that he posted to Twitter. “I look forward to taking on next year with my team, sponsors and determination.”

Busch joined SHR in 2014, and Monster became his sponsor with the team in 2016. It split the season with team co-owner Gene Haas, whose company, Haas Automation, is the primary sponsor for about half the races.

Having made the playoffs in each of his four years at SHR, Busch has five wins driving for the organization. He has 29 career wins in 612 starts.

Busch opened 2017 by winning the Daytona 500. The rest of the season was good, but not great as he was eliminated in the first round of the playoffs. He finished 14th in the standings with six top-5s and 15 top-10s.

Busch said that after his option was not picked up, he had talks with other teams, but SHR was clearly the best option for him.

“I talked with other owners, and the offers were about the same from other teams,” Busch said Nov. 29 about his plans to remain at SHR.

“But the offers weren’t the same as far as level of car. To work with [engine builder] Doug Yates and Ford and all the individuals that I’ve grown around and felt comfortable with at Stewart-Haas, that’s not available at other teams.”

Busch has recently signed with Livewire Entertainment in Orlando, Florida, to serve as his management agency. He also has hired Hollywood agency ICM Partners to pursue media opportunities.