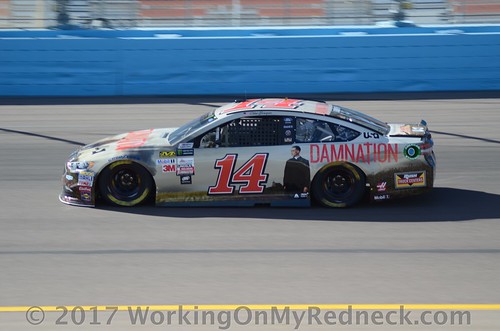 ● Told crew on the pace lap that he appreciated its hard work in 2017 and that he was proud to be on the team.

● Pitted during a lap-five caution and dropped to 20th.

● Bowyer used new and much faster tires to climb into 10th despite reporting his car was sliding sideways off the corners.

● Bowyer told his crew if it could tighten the car he would be able to go much faster.

● The adjustments plus the changing track conditions made the car harder to turn, slowing his progress.

● At lap 142,Bowyer put on used tires for the final 10-lap run, preferring to save new tires for later in the race. He dropped to 15th.

● Bowyer told his crew on the opening lap of the final stage that the car took off the best it had all race.

● Bowyer pitted from 13th on lap 198 for fuel, tires and handling adjustments after telling the crew his car was “sideways off the corners.”

● Bowyer climbed as high as ninth with 45 laps remaining.

● A caution with 39 to go saw Bowyer pit from 10th for minor, front-end repairs after he said he hit a brake rotor on the track.

● Bowyer restarted the race in 10th with 34 laps to go, but handling issues kept him from climbing higher.

●  There were five caution periods for a total of 26 laps.

●  Martin Truex Jr., won the Ford EcoBoost 400 to score his 15th career Monster Energy NASCAR Cup Series victory. It was his series-best eighth win of the season, but his first at Homestead. His margin of victory over second-place Kyle Busch was .681 of a second.

“Man, the track was a lot slicker than I expected when we started the race. We had a good car, but we were on knife edge all night. First we are too loose, and we made an adjustment and we’d be too tight. It’s hard to believe the year is over. I’m proud of all the people on the No. 14 team. They worked hard this season. We’ll enjoy the off-season and be ready to race again in Daytona.”