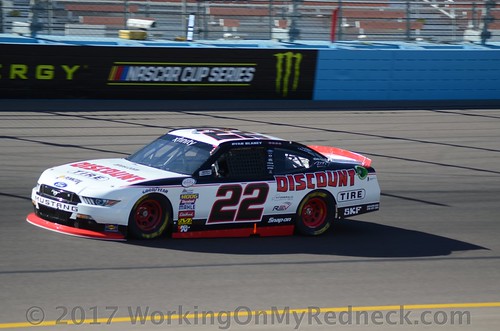 Recap: Ryan Blaney started sixth and finished second in Saturday afternoon’s Ticket Galaxy 200 at Phoenix International Raceway with the No. 22 Discount Tire Ford Mustang after a dominating performance. On the initial start, Blaney showed the speed of the Mustang, powering to the third position in the opening laps. Throughout the first stage, Blaney battled a Ford Mustang that was tight on corner exit, but was able to move forward, capturing the race lead by lap 38 where he’d conclude the opening 60 lap stage. On the first pit stop of the race, crew chief Greg Erwin adjusted with wedge and air pressure, sending Blaney back to the track to restart as the race leader. In the opening laps of the second stage, Blaney communicated to the team that he was loose in and tight off exit but overall the handling was not bad. The 23 year-old-driver would dominate the second 60 lap stage and win his second stage of the 200 lap race. At lap 122, crew chief Greg Erwin elected to bring Blaney to pit road for four tires, fuel and a track bar adjustment, putting the team in the first position to start the third and final stage. Blaney was able to maintain the race lead with the No. 22 Discount Tire Ford after an extensive battle with the No. 20 of Erik Jones. Once Blaney checked out from the field in clean air, he reported the handling of the No. 22 Mustang was better than previous runs. Blaney would pit from the lead during a caution at lap 183 for four tires, fuel and a small adjustment to the Discount Tire Ford. The No. 22 Ford Mustang was the fourth car off pit road but the first with four tires. Blaney quickly worked his way to the second position and began running down race leader William Byron. Blaney would ultimately bring the No. 22 Discount Tire Ford Mustang home in the second position and secure a spot in the championship four in hopes of winning Team Penske’s fourth owner’s title.

Quote:  “It was a good race for us.  Honestly, I thought we had a really good car and we got it better each run, except for the last one really.  I thought our long-run speed was really good and we came in and got four and I was kind of free taking off each run, so we short-filled it a little bit.  I thought that was gonna be enough to tighten us up and we just needed more, so then the 9 got out front and we couldn’t run him down.  I was really, really loose so that stinks.  We figured out a really good way to lose these things.  We’ve finished second a lot this year in that car, so that’s unfortunate, especially when we had a great car today, but that’s the way it goes sometimes.  That stinks, but, like I said, that car is in the owner’s championship so hopefully it can go and win that thing next week at Homestead.  That would be great.”