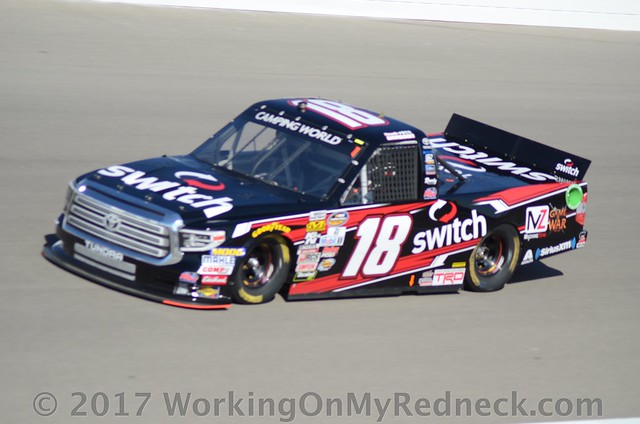 Last year Noah Gragson made his very first NASCAR Camping World Truck Series (NCWTS) start at Phoenix (Ariz.) International Raceway. With the huge learning curve he faced that day, Victory Lane seemed like a mirage off in the distance, but this year is a different story. With one win in the books already, the 19-year-old rookie sees winning at Phoenix as his goal.

Gragson has actually made two starts at the one-mile oval. In 2015, he competed in the NASCAR K&N Pro Series West race at Phoenix. He completed all 101 laps, but did not get the finish he wanted having to settle for 14th place. Last year was another new experience making his first start in a Toyota Tundra. To help him prepare for running the full season in 2017, Gragson went to Phoenix and Homestead-Miami (Fla.) Speedway to compete and absorb as much information as he could. He did what he needed to do by once again completing all of the laps and gaining experience from his 16th -place finish. Victory Lane was the last thing on his mind that day.

Now the Las Vegas native returns to Phoenix for the third time with new goals and a new outlook. Coming off his win at Martinsville (Va.) Speedway last month, Gragson has more confidence, skill and knowledge than before. He also has a veteran crew chief who knows how to win at Phoenix. Marcus Richmond guided Timothy Peters to the checkered flag in 2015 and has three top-five and six top-10 finishes in 11 starts there.

Now it is up to Gragson to put all the pieces together by using what he learned in his previous two starts at Phoenix, along with the experience he has gained at similar tracks this season to fight for the win. Having won the pole at both Iowa Speedway in Newton and New Hampshire Motor Speedway in Loudon earlier this year, Gragson clearly has the speed it takes to succeed on smaller tracks. If he can start up front and remain there for 150 laps Friday night, his mirage will come into focus as he drives his Switch Tundra into Victory Lane.

You made your first NCWTS start at Phoenix last year. What did you learn from that experience?

“Since it was my first truck race, I was trying to take everything in and figure out how to race a truck. I had to figure out the track and how to race against a new group of drivers I’d never raced against before. Now I feel a lot more comfortable with the tire and the aero, so hopefully I can be a lot better when I get there Friday. I won’t have as much to learn, so I can spend more time trying to help make the Switch Tundra faster.”

Having one race at Phoenix under your belt, what is your focus this year?

“Winning the race is my ultimate focus this time. Before I just wanted to learn about the truck, the tire and the track, but now I feel like I can actually contend for a win. I feel like we’ve been good at the flat, short tracks like New Hampshire. We sat on the pole there and led the first 40 laps, and that’s a lot like turns three and four at Phoenix. Hopefully I can take some of that experience I gained at New Hampshire and apply what I learned from last year to contend for the win.”

Being so close to Las Vegas, do you feel like Phoenix is another home track for you?

“It will be good to go back out west since it’s my second-closest race to home. I’ll have quite a few family and friends at the race. My parents and grandparents will be there, along with a few friends from California, so it will be fun to have all of them there supporting me. I’m used to racing in the dry heat, so it will be nice to get back to that before the humidity next week in Homestead.”

What is the most challenging aspect of Phoenix for a crew chief?

“I think trying to keep track position and making sure your driver is out front for the last stage. You don’t want to get your pit strategy off and put yourself in the back, kind of like we did last weekend at Texas. It’s tough when you have a good truck, but can’t capitalize on a good finish, so track position is definitely key.”

KBM-042: The No. 18 Switch team will race KBM-042, for Friday’s Lucas Oil 150. Gragson has raced this Tundra five times this season. His best finish was fifth at Kentucky Speedway in Sparta.

Richmond has one win, three top-five and six top-10 finishes in 11 starts as a NCWTS crew chief at Phoenix. He took the checkered flag with Timothy Peters behind the wheel in 2015.