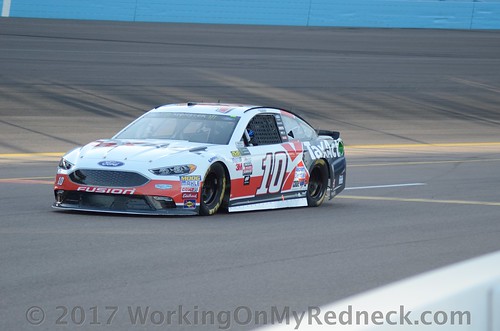 ● The No. 10 Ford Warriors in Pink Ford Fusion team was scored in the 22nd position when Patrick made contact with the No. 47 car, which resulted in right-front damage. The team was able to pit under caution for repairs.

● Despite the damage, the team stayed on the lead lap and finished the stage 31st.

● The No. 10 Ford Warriors in Pink Ford team pitted for tires, fuel and chassis adjustments at the conclusion of the stage.

● When the caution flag waved at lap 303, crew chief Billy Scott called for Patrick to stay out and take the wave-around, putting the No. 10 Ford Warriors in Pink Ford team back on the lead lap in the 22nd position.

● Patrick went a lap down to the leader again at lap 449. When the caution flag waved less than 10 laps later, Scott had Patrick stay out and wave around to get back on the lead lap once again.

● In the closing laps, Patrick was able to race her way up to 17th.

● Patrick earned 20 points in Sunday’s race at Martinsville Speedway, which puts her at 478 total points for the season thus far. She is ranked 27th in the driver point standings.

● Kyle Busch won the First Data 500 to score his 43rd career Monster Energy NASCAR Cup Series victory, his fifth of the season and his second at Martinsville Speedway. His margin of victory over second-place Martin Truex Jr. was .141 of a second.

● Truex leads the championship standings with 4,117 points and holds a 17-point margin over his nearest pursuer, Busch.