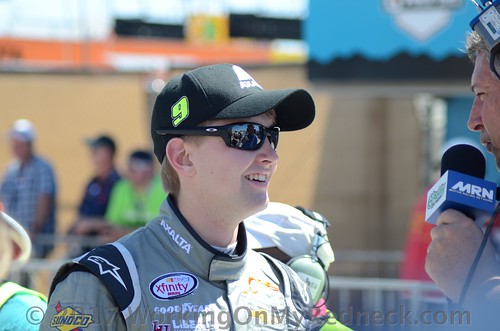 Last season, William Byron led the NASCAR Camping World Truck Series the majority of the season, racking up a rookie-record seven wins. When the Playoffs came around, his engine blew with a late lead in the penultimate race of the year, eliminating him from championship contention.

Byron has carried his success into the NASCAR XFINITY Series this season. He enters the Round of 8 opener – Saturday’s Kansas Lottery 300 at Kansas Speedway – first on the Playoff Grid. He sits 19 points above Cole Custer on the cutoff line as a result of his three victories, three stage wins and third-place regular season points finish.

The 19-year-old Charlotte native has never made an XFINITY Series start at Kansas, but won the Camping World Truck Series race there last season.

“Kansas Speedway is a fun race track to go to. The last time I was there, I was fortunate enough to win my first NASCAR Camping World Truck Series race and I can’t wait to get back and have a good run in the XFINITY Series,” Byron said. “It is an important race to start out this round of the playoffs, so we plan on having a strong day and executing well.”