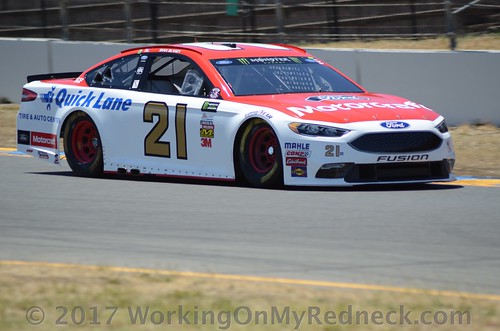 Ryan Blaney and the No. 21 Motorcraft/Quick Lane team took a car that wasn’t handling very well early on in the Bank of America 500 at Charlotte Motor Speedway and tuned it to the point that it finished eighth. The team now heads to Talladega Superspeedway just five points back of a spot among the top eight that will advance to the third round of the Monster Energy Cup playoffs.

Blaney started the 500 from 15th place but was running outside the top 20 when the planned competition caution flag flew at Lap 35.

From that point on, the Motorcraft/Quick Lane team worked on the No. 21 Fusion on each pit stop, and by the end of Stage Two, Blaney was running in the ninth position, which earned him two valuable stage points.

From then on until the checkered flag, Blaney was able to maintain a spot in the top 10 as he finished eighth for his 11th top-10 finish of the season.

Among the issues the Motorcraft/Quick Lane team had to overcome was a broken tether on the left-rear wheel. That meant the jack needed an extra pump or two to get the left side lifted on pit stops. Even so, the over-the-wall crew repeatedly returned Blaney to the track with a minimum of lost time.

“It’s solid,” Blaney said of his team’s performance on Sunday. “I thought we did a good job of getting better throughout the race.

“We were a lot better at the end of the race than what we were at the beginning. That says a lot about the team and hopefully we can keep it up and run decent the next two weeks.

“I’m proud of the effort to get better and the hard work, so that’s what we needed.”

Blaney’s now 11th in the championship standings, well within reach of the elite eight as the circuit heads to Talladega, where unexpected turns of events are the norm, as team co-owner Eddie Wood said.

“Our goal coming into Charlotte was to not do anything to take ourselves out of the playoff picture,” Wood said. “Ryan drove a smart race, stayed out of trouble and didn’t panic when the car wasn’t handling well at the start of the race.

“We raced around the people we’re competing against for the cut-off position, which is where we should be running, and the pit crew did a great job despite some challenges with the broken tether.

“Now we’ll all go to Talladega, which is going to tell the story for all of us in this round of the playoffs.”

Blaney said he knows how he’d like that Talladega story to read.

“We’re going to try to run up front and win,” he said.