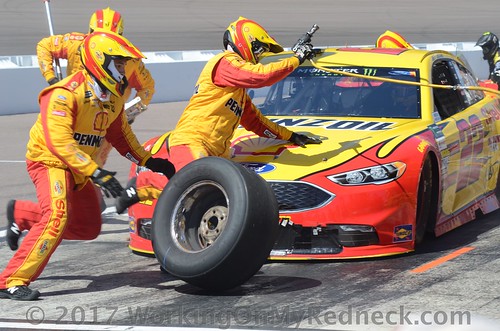 Recap: Brad Keselowski and the No. 2 Fitzgerald Glider Kits Ford Fusion team put forth a strong effort in Saturday night’s Federated Auto Parts 400 at Richmond Raceway, but late-race contact resulted in the team finishing in the 11th position. After winning Fridaynight’s NASCAR XFINITY Series race at Richmond, Keselowski began the Monster Energy NASCAR Cup Series (MENCS) event from the 15th position. The 2012 series champion wasted little time in maneuvering through the field as he found himself inside the top 10 by the first caution flag of the day at lap 35. Keselowski was routinely one of the fastest cars on track during the first, 100-lap stage before staying out under a lap 87 caution period to preserve tires for later in the race on the tough Richmond surface. All of the other lead cars elected to pit for tires and on the restart, Keselowski was moved up the track by the No. 18 of Kyle Busch to, ultimately, finish 21st in the first stage. Keselowski restarted 20th for the second, 100-lap stage after received service under the break, but again he moved through the field with ease. He radioed to crew chief Paul Wolfe that his Ford had great balance. The racing action in the second stage ran caution free and that allowed Keselowski to drive up to the fifth position before the end. Over the final, 200-lap stage Keselowski radioed that his Fitzgerald machine was losing rear grip, but he was still able to keep his Ford inside the top three for most of the stage. A solid call by Wolfe to pit early on lap 320 allowed Keselowski to cycle to the lead at lap 349 and it looked like he may challenge for his second win in as many days. However, a late-race caution set up an overtime scenario and as Keselowski restarted fourth at lap 403 he was contacted from the rear by the No. 41 of Kurt Busch. The contact moved Keselowski up the track and allowed several cars to pass underneath his Ford. As a result, Keselowski finished in the 11th position. The No. 2 team will head into the 2012 MENCS Playoffs as the fourth seed on the strength of two wins and 11 top-five finishes.

Quote: “We had a really fast Fitzgerald Glider Ford. Early in the race I thought we were going to drive up and win it, and then the last two or three runs we just kind of lost the handle, but all in all a strong day. We’re still looking for some rear downforce in the Fords. I think if we had that, we might have had a shot at it, but, all in all, we ran solid and ran competitive, so that’s good.”

Recap:  Joey Logano started 12th and finished second in Saturday night’s Federated Auto Parts 400 at Richmond Raceway in the No. 22 American Red Cross/Shell-Pennzoil Ford Fusion, coming up one position shy of the needed victory to qualify for the 2017 Monster Energy NASCAR Cup Series playoffs. At the drop of the green flag, Logano worked forward from the 12th starting position reaching the sixth position by the end of the first stage. The team pitted twice during the first 100 laps, working on corner entry and exit with wedge and air pressure adjustments. The No. 22 Ford pit crew did not disappoint all night, executing the first two pit stops with positional gains, keeping with the trend of being one of the fastest crews on pit road over the last month. By the middle of the second stage, Logano reported the American Red Cross Ford Fusion to be slightly free on corner exit, but overall a great handling car as he raced his way inside the top five, running lap times as fast, or faster, than the leaders throughout the stage. At the conclusion of the second stage, the team would pit from the fourth position and again gained a position off pit road, moving into the top three. As the third stage began, Logano reported that he was losing forward drive and crew chief Todd Gordon called for wedge adjustments on the fifth stop of the race in hopes of giving the No. 22 Ford the needed forward drive. The team continued inside the top 10, including surviving a green flag pit cycle and battling with cars who had fresher tires before a late caution brought all the lead lap competitors back to pit road. Logano would start in the tenth position for the final restart of the race. With a playoff position on the line, chaos ensued with competitors scattering entering turn 1. Logano worked masterfully through the first and second turn. As the field entered turn three, additional cars would begin sliding as the No. 22 American Red Cross/Shell-Pennzoil Ford Fusion raced forward, reaching the second position as the white flag flew. The yellow flag would be displayed for the final time as Logano pursued eventual race winner Kyle Larson down the backstretch, stopping the team one position short of clinching a playoff berth.

Quote:  “We came into the weekend saying second would be a failure and we finished second, so one spot short with the American Red Cross Ford Fusion.  But, overall, I’m proud of this team.  We came in here with the pressure on us and we executed the best we could.  We scored some good stage points, which don’t mean anything, but it means we’re up front at least.  We just came up a little bit short there at the end.  I had a good restart.  The last run before that we short-pitted and we lost a lot of speed that run.  For whatever reason we lost all of our track position and fell out of the top five, and then just fought hard there at the end to try to make something happen.  Hopefully, there was another caution.  They all but brought out a caution, but overall we’ve got 10 races to go and we’ll make it exciting for everyone that’s in the Playoffs when there is a car running for the win that’s out of it.  It’ll be interesting for us.  That’s the end of our championship run, but it’s not the end of our season.  We’ve still got a lot to race for.”