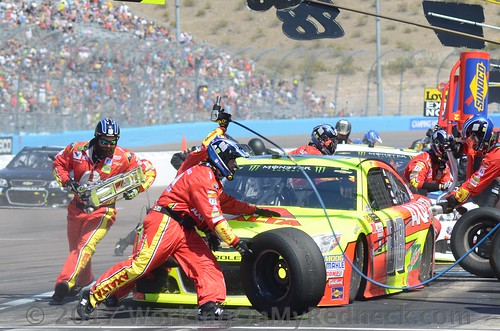 From the standpoint of a large portion of the NASCAR fan base, no outcome at Richmond Raceway could be better than Dale Earnhardt Jr. winning Saturday night’s Federated Auto Parts 400 and qualifying for the playoff in his last season of full-time Monster Energy NASCAR Cup Series racing.  That would make all of the world, and especially in JUNIOR NATION, all good!

But Earnhardt himself doesn’t consider that a likely prospect!

“Just right now, if we had to line-up and race, I think we’ve got about a sixth to 12th place car,” Earnhardt said after Friday’s final practice at the .75-mile short track. “We could run a fast lap that was a top-10 lap in the first two practices in race trim. After about 30 laps, we were behind the Penske guys on speed and we were behind all the Toyotas on speed by a tenth (of a second) or two.

“We tried some things in the second practice that won’t get us front-end speed, but we did some things that I think will help our car on the long run. So we’ve got to just hope that’s going to work for us in the race. But, these races aren’t typically long-run races anymore, especially with the stages and late cautions and stuff.”

The bottom line? Though anything can happen in a NASCAR race, a world class miracle might not be in the cards for Earnhardt on Saturday night.

“I haven’t thought about any fairy tales,” Earnhardt said.