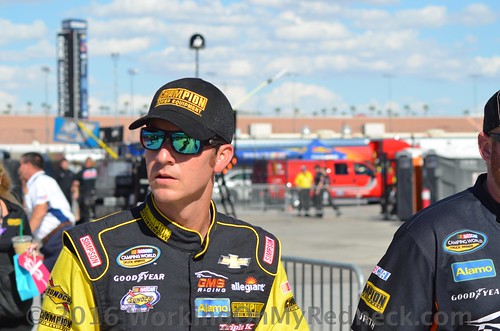 Do you think the added seat time from your five ARCA Racing Series starts, combined with your NCWTS start in 2016, will be an advantage over the other rookies in the field on Saturday?

“At most tracks, I feel like seat time in the ARCA Series has helped me get a feel of the track, even though the cars drive a good bit differently than the trucks. Michigan however, is it’s on style of truck race. I don’t think the ARCA laps will help, but my experience racing the truck last year will definitely be a benefit. Michigan is in between a super speedway track, and an intermediate track for the Truck Series. We use the draft a lot, but you still need a good handling truck to be able to drive around other trucks. I finished eighth at MIS last year, and learned a lot. Jeff (Hensley, crew chief) has run really well there, and he won this race a few years ago with (Johnny) Sauter, so we are looking forward to this one. I’m happy to have Champion Power Equipment back on board again for the next two races, and look for solid runs as we head into the Playoffs.”