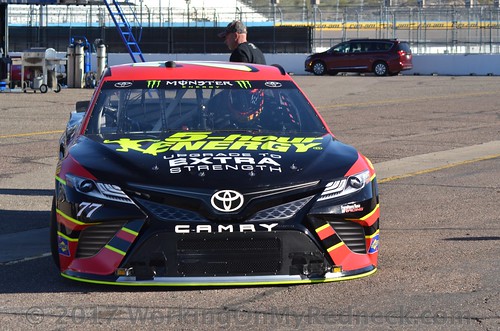 Erik Jones made big gains in his young road racing career by steering his No. 77 5-hour ENERGY Extra Strength Toyota to a 10th-place finish in Sunday’s I Love New York 355 at The Glen.

It was Jones’ second straight top-10 finish and seventh of the season.

“The 5-hour ENERGY Toyota was good all day despite some brake issues from the beginning,” said Jones. “I thought we had a top-10 car, maybe a top-five car had circumstances played out. I had a bad stop and got boxed in behind the 43 (Aric Almirola) so we just didn’t quite get the finish that we wanted. But all in all it was a good day for our Furniture Row Racing team.”

Despite the top-10 finish, Jones dropped two positions, to 18th, in the NASCAR Cup Series point standings after 22 races. He is 31 points behind Daniel Suarez for 15th place.

The 21-year old qualified the Furniture Row Racing entry in the sixth position earlier in the afternoon, lining up out the outside of Row 3 for the 90-lap race on the 2.454-mile Watkins Glen International road course. He called over the radio early to interim crew chief James Small that there was an issue with the Toyota’s braking. He was able to maintain his starting position until pitting on Lap 17, three laps prior to the end of the day’s first stage. On a separate race strategy than many of the leaders, he finished the stage in the 25th position.

Those leaders did pit during the caution, however, which allowed the No. 77 5-hour ENERGY Toyota to start Stage 2 in seventh place. Jones picked up two spots in the running order by the end of the second 20-lap stage to earn six championship points for his efforts.

Small kept Jones on the racing surface during the second intermission, in doing so starting the 50-lap final stage in fifth place. Jones pitted under caution on Lap 53, taking four tires and fuel. He was boxed in by the car ahead of him while attempting to exit his pit, however, and returned to the field in 16th place for the restart on lap 55.

Jones was scored 18th on Lap 60 but picked up two positions by the end of Lap 70. He was 13th with 10 laps remaining, which was when the fuel strategy from the beginning of the race played out. Three of the cars ahead of him had to pit late for fuel which provided the opportunity for Jones and the No. 77 5-hour ENERGY Toyota to earn a solid 10th-place finish.