At a track where his father raced, and a track where he was a “garage rat” as a child, Martin Truex Jr. won Sunday’s I Love New York 355 Monster Energy NASCAR Cup Series race by slowing down over the closing laps.

Truex let Brad Keselowski pass him for the lead on Lap 77 of 90. On instructions from crew chief Cole Pearn, Truex also let Ryan Blaney past his No. 78 Furniture Row Racing Toyota on Lap 83.

All the while, Truex was saving fuel, with Pearn calculating that both Keselowski and Blaney would have to stop for a splash of gas. The strategy played out as expected, with Keselowski giving up the lead for a trip to pit road on Lap 87 and Blaney following a lap later.

That left Truex to hold off a desperate charge from Matt Kenseth on the final lap, with Truex streaking across the finish line .414 seconds ahead of the No. 20 Joe Gibbs Racing Camry. Kenseth’s teammate, Daniel Suarez, rolled home in third to register a career-best result.

“I’m a little bit lost for words at the moment, just because I’ve been thinking about this one a long time – all weekend, all day,” said Truex, who won for the fourth time this season and the 11th time in his career.

“Then, at the end there, just it’s so hard there to let guys pass you for the lead. You’ve just got to listen to your crew chief and, luckily for me, I’ve got the best one in the business, and I just believe in him so much, and I just do what he says and it seems to work out.”

Kenseth, who remains on the playoff bubble with four races left before the 16-driver field is set, was disappointed at coming so close to the victory—one that would have guaranteed him a playoff spot.

“I’m second happiest,” said Kenseth who was also saving fuel and gunned it on the last lap. “Martin is the happiest. We really needed the win. Honestly, I don’t even think about the playoffs. I more think about coming here for however many, 15, 17, 18 years, whatever it’s been, and not really having a win or an opportunity to win and never even really been that great here.

“I felt like we had a top-five car. Obviously, we had good fortune there at the end with our track position and our fuel mileage and all that to stay in it and have a shot at it, but man, when it’s that close and you see him saving and you’re saving and then you go after him there on that last lap, it’s disappointing not to get it. Especially when I saw him miss Turn 6, I was like, ‘Man, I’m going to have a shot,’ and he was so fast I still couldn’t get to him getting into (Turn) 7.”

Polesitter Kyle Busch led all 20 laps of the race’s first stage, but a snafu on pit road left his left front wheel loose, and Busch had to return under caution during the stage break to correct the problem. That left him deep in the field for the subsequent restart on Lap 25.

Busch worked his way back into the top 10, but after restarting ninth on Lap 45, his No. 18 Toyota and Keselowski’s No. 2 Ford collided in the bus stop chicane, sending both cars off course. Busch wasn’t a contender for the victory after that, though he did rally to finish seventh.

Notes: Truex expanded his series lead to 116 points over Kyle Busch, who moved past 23rd-place finisher Kyle Larson for second place. … Truex also increased his playoff point total to 34. Three-time winner Jimmie Johnson is second with 16. … Busch collected his ninth stage win to raise his playoff point total to 14. … The three winless drivers currently in playoff-eligible positions (Chase Elliott, Jamie McMurray and Kenseth) are seventh, eighth and ninth in the standings, respectively, all within an 11-point range.

Check out the unofficial results of the I Love New York 355 at The Glen. 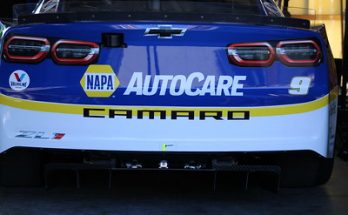