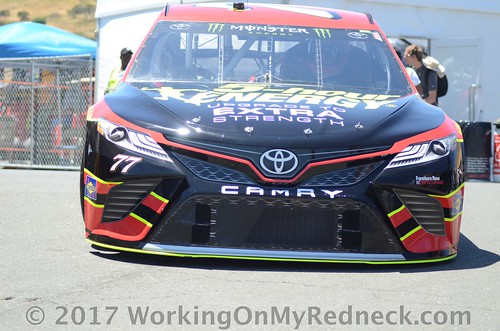 Erik Jones and the No. 77 SiriusXM Toyota team overcame a loose-handling race car and equipment failure on pit road to finish eighth in the Overton’s 400 at Pocono Raceway.

It was Jones’ sixth top-10 finish of the season and second straight top 10 at Pocono (he finished third in the June race there).

“It was okay, just up and down,” said Jones. “We just needed track position most of the day. We had a loose wheel and that put us way behind. We just had to work back from that. The SiriusXM Camry had good speed, but just the handling wasn’t great all day – rear grip really. We made some adjustments throughout the day and just have to keep working at it.”

The 21-year-old rookie moved up one position, to 16th, in the NASCAR Cup Series point standings after 21 races. He is 22 points behind Ryan Newman for 15th place.

Jones started on the inside of Row 5 for Sunday’s 160-lap race after qualifying ninth earlier in the day on the three-turn, 2.5-mile track. The handling of the No. 77 SiriusXM Toyota was loose from the green flag and adjustments made during a pit stop on Lap 26 didn’t seem to help matters. Jones was scored 13th after the first 50-lap stage.

Further adjustments made under caution before Stage 2 began made the difference and Jones made a slow but steady march forward. Crew chief Chris Gayle was playing the strategy came that earned the team its season-best third-place finish in June. He called Jones to pit road with just a couple laps remaining while running eighth. Unfortunately, the front-tire changer’s gun jammed during the stop, slowing the stop and forcing Jones back to pit road for a loose lug nut.

That put the No. 77 Furniture Row Racing team in 24th to start the final stage. Jones worked his way up to 12th with 40 laps to go. Gayle kept his driver out while many of the leaders began to pit under green. Jones ran second with 20 to go before making that final stop. He dropped to 11th but picked up three positions to take the checkered flag in eighth.