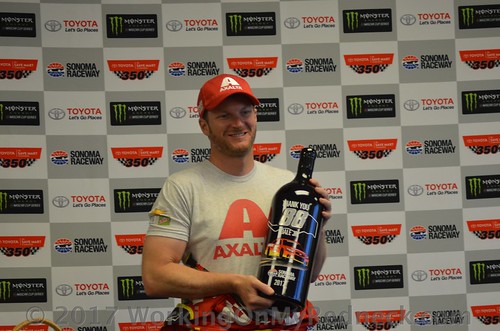 In his last season as a full-time Monster Energy NASCAR Cup Series driver, Dale Earnhardt Jr. doesn’t have time for nostalgia—even as he makes his last visits to a succession of tracks.

He has simply been too busy trying to find speed in his race cars.

“Well, it’s certainly different to have an end point,” Earnhardt said after Saturday’s final practice at Indianapolis Motor Speedway. “To have a time and a date out there that you know is coming…  For years and years, you just never knew when you were going to retire.

“I still feel like I have to allow myself to get competitive, and I want to go out there and do well in all the practices and all the races, and I want our team to have success. There’s not as much probably stopping and smelling the roses as I would like. I guess if we were maybe running a little better, it would be a little more of that. But we’re just grinding away trying to get our cars better.”

Earnhardt wasn’t happy with the balance of his No. 88 Hendrick Motorsports Chevrolet during the first two practice sessions, but he was eighth fastest in Happy Hour at 185.147 mph versus 185.854 mph for Erik Jones, who topped the speed chart.

And like every other race car driver, Earnhardt is willing to sacrifice comfort for speed.

As a memento for his final run at the Brickyard, speedway president Doug Boles gave Earnhardt the number “8” from the old pylon that used to display the running order of the cars. Figuratively speaking, Earnhardt doesn’t need reminders to realize he’s in the home stretch of his career.

“We turned the corner and we are coming down the last straightaway and going to these race tracks, and this year is going to wrap up pretty quickly before you know it,” he said. “Just trying to enjoy being behind the wheel. When you are out there driving and beating your head against the wall trying to figure out how to get faster, you’ve got to remind yourself a little bit to enjoy it, enjoy these last few runs, because it’s fun.

“It’s fun driving the car. Just the pure enjoyment of racing and driving is always going to be there, and that’s going to be there long after I retire, and I’ll miss some things about that. So I’m just trying to make sure I’m really taking that in, just the driving part. There is a lot of stuff that you try to take in, but we’re still trying to get faster and get better.

“Farewell tours aren’t quite as graceful as they sound. You can’t really kind of skip through a season, even if it’s your last.”

To make this a more enjoyable “farewell tour” Dale Jr. needs to figure out a way to snag a “farewell victory” before he officially hangs up his helmet for the last time!