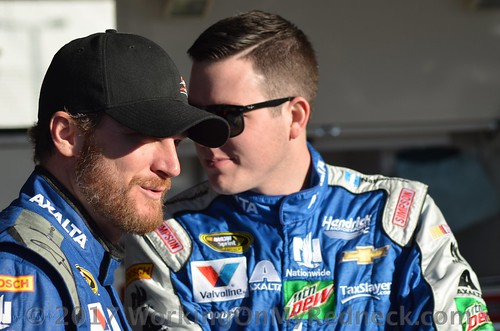 Now that Rick Hendrick has announced that Alex Bowman will be driving the HMS No 88 in 2018, how will Hendrick prepare Bowman for next year?

Bowman has been the “test driver” for HMS over the past couple of years, testing cars, running simulation, etc, but that is no substitution for the actual racing experiences necessary to keep a driver’s skills sharp.

It would appear that Hendrick may need to find Bowman some Cup racing experience in the remaining part of the 2017 season. Since HMS is already at the four race team limit decreed by NASCAR, there are a few options that could be exercised to get Bowman back into a Cup car for some races this season.

Hendrick could do that by trying to put together some race packages with some of the other Chevy race teams.  The one Cup team that has room to expand, and uses Hendrick engines is Chip Ganassi Racing.  Would Chip Ganassi be willing to help out a competitor, Hendrick Motorsports, when in the heat of a championship run with Kyle Larson?  I am just say…..

Another prominent Chevy team is Richard Childress Racing, however it is high unlikely that Childress would be willing to help further a competitor, HMS, in their attempt to gain experience for Bowman.

Likewise, would the Chevy team of JTG/Daugherty Racing be willing to expand to a third team for a few races to help out Hendrick this year?

There are a couple more race teams that may be willing to partner with Hendrick Motorsports.  However, unless there is an overwhelming financial windfall to those teams, it may be unlikely that Rick Hendrick can put together that kind of package with another Cup team.

2 Comments on “Does HMS Need To Get Alex Bowman Some Race Experience This Season?”