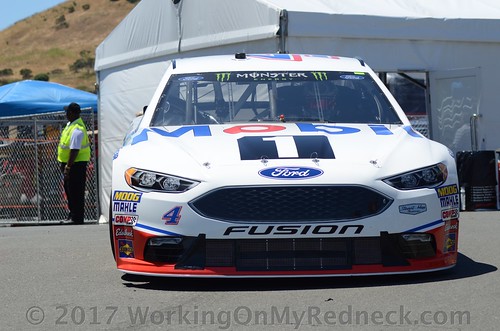 ●  The Busch Beer Ford started out with a loose-handling condition early in the race.

●  Harvick pitted on lap 33 for four tires, fuel and two rounds of wedge to correct the loose-handling issue.

●  Harvick ended the first stage in the 13th position.

●  Harvick noted that his Busch Beer Ford improved handling rolling through the center during the first portion of Stage 2 as he moved to the fourth position on the restart.

●  After the first caution period in Stage 2 Harvick raced his way into the second spot, holding the runner-up position for the majority of the stage.

●  The Busch Beer Ford made slight contact on lap 138 with the No. 11, resulting in Harvick dropping to the third spot.

●  Harvick came to pit road for four tires, fuel and left-rear wedge at the conclusion of Stage 2, gaining a position on pit road.

●  Harvick moved his line to the middle groove to improve his handling at the beginning of the final stage.

●  The Busch Beer crew made chassis and tire pressure adjustments under green to improve a loose-handling condition with 65 laps remaining.

●  After green-flag stops cycled through, Harvick raced into the fifth position and held the spot until the race conclusion.

●  There were seven caution periods for a total of 34 laps.

●  Denny Hamlin won the Overton’s 301 to score his 30th career Monster Energy NASCAR Cup Series victory, his first of the season and his third at New Hampshire. Kyle Larson finished second by .509 of a second.

●  Martin Truex Jr. leads the championship point standings with 758 points and has a 38-point margin over his nearest pursuer, Kyle Larson.

Kevin Harvick, driver of the No. 4 Busch Beer Ford Fusion for Stewart-Haas Racing:

“This was a great weekend for our Busch/Jimmy John’s Ford. The guys did a great job. They made it a little better than it was in practice, they executed on pit road all day, and we just did all of the little things right. We didn’t have the speed that the Toyotas had through the center of the corner. As the long run would go we would just get a little bit worse and that gap would get a little bit wider, but we hung in there and fought all day. Everybody did a great job, and we got a good finish.”