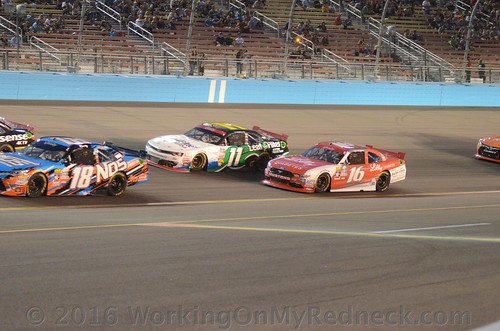 Kaulig Racing driver Blake Koch powered the No. 11 LeafFilter Gutter Protection® Chevrolet Camaro to a 13th-place finish on Saturday in the NASCAR XFINITY Series (NXS) Overton’s 200 at New Hampshire Motor Speedway (NHMS). Koch started 14th in the 200-mile event, which was red flagged for heavy rain early in the race.

“It felt so good just to finish the race today in one piece after a tough couple of weeks,” said Koch. “Our No. 11 LeafFilter Gutter Protection team brought a really fast Camaro and we were able to capitalize on the improvements we made overnight after practice on Friday. This finish will give us some great momentum to carry into the races ahead.”

With dark skies looming, the field took the green flag at the one-mile track and completed 30 laps before the caution was displayed for a single-car incident, followed immediately by a red flag for heavy rain. When the caution was displayed, Koch ran 15th and was trying out the high and low grooves on the racetrack to see where his car handled better.

Nearly an hour after the red flag was displayed, drivers returned to their cars under sunny skies to resume the race. Staying out to gain track position, the team did not pit, putting Koch in the fourth position for the restart with 10 laps remaining in Stage 1. As drivers with fresher tires advanced through the field, Koch finished 11th when the stage ended on Lap 45. Under the caution, crew chief Chris Rice brought Koch down pit road for fresh tires, fuel and an air pressure adjustment.

Koch restarted 20th on Lap 51 and had raced his way up to 15th with 20 laps remaining in Stage 2.  He reported to the team that he was tight in the center of Turns 3 and 4 as he ended Stage 2 in the 13th position. Rice brought Koch down pit road under the caution for fresh tires, fuel and an air pressure adjustment to loosen up the No. 11 Camaro.

The West Palm Beach, Fla. native restarted 14th when Stage 3 began on Lap 96 and was up to 13th at the halfway point in the race. Koch maintained that position until the final pit stop of the day on Lap 170 under green-flag conditions. The team’s flawless two-tire stop allowed Koch to maintain his track position and ultimately cross the finish line 13th in the Overton’s 200 at NHMS.