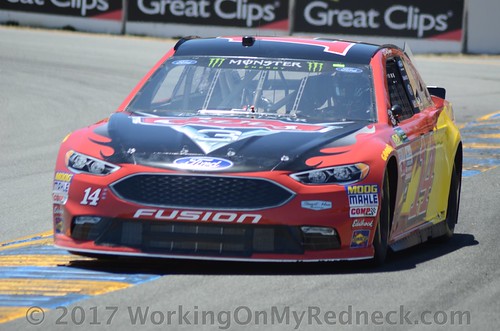 ● Crew made air adjustments to all four tires during a pit stop to make the car turn better.

● Climbed as high as seventh and overcame a quick spin after contact with Brad Keselowski.

● Suffered significant left-front damage on lap 36 after contact with AJ Allmendinger, who spun in the middle of the hairpin.

● Suffered a speeding penalty on lap 47.

● Made several stops for repairs in the final laps of the stage.

● Started at the back of the field but moved to 22nd in the first 10 laps of the stage.

● Climbed to 10th on lap 82 by turning some of the fastest laps in the field.

● Closed within a few seconds of winner Kevin Harvick but never threatened.

● This was the 38th points-paying Monster Energy NASCAR Cup Series win for Stewart-Haas Racing (SHR), its second of 2017 and its second at Sonoma.

●  This was Harvick’s first NASCAR Cup Series win with Ford. He became the 83rd different driver to win a Cup Series race in a Ford.

●  Bowyer earned his third top-five and sixth top-10 of 2017 with his second-place finish at Sonoma.

●  Bowyer finished 10th in Stage 1 to earn one bonus point.

●  There were six caution periods for a total of 12 laps.

●  Twenty-three of the 38 drivers in the Save Mart 350k finished on the lead lap.

●  Kyle Larson leads the championship standings with 659 points and has a 13-point margin over his nearest pursuer, Martin Truex Jr.

Clint Bowyer, driver of the No. 14 Ford Fusion featuring Cars 3for Stewart-Haas Racing:

“I wish we could do this day over again. We were in the wrong place at the wrong time a couple of times. The car was really fast, but she got beat up. The guys fixed it up and we were pretty sporty there at the end. To get second place considering where we came from is pretty cool. We were hoping Lightning McQueen would strike twice, but we still gave him a pretty good run.”