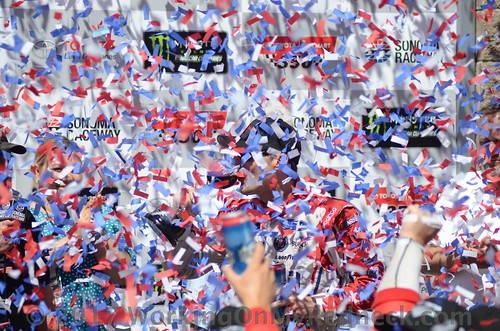 On Sunday Harvick mixed it up with the big boys in Sunday’s Toyota/Save Mart 350, and the outcome was the same.

Executing an ideal strategy for the long green-flag run that consumed the second half of the race—minus roughly 200 yards—Harvick won a Monster Energy NASCAR Cup Series event for the first time this season, the first time at Sonoma and the first time in a Ford, after Stewart-Haas Racing made an offseason switch from Chevrolet.

In winning for the 36th time in 590 career starts, Harvick took the checkered flag under caution after Kasey Kahne’s Chevrolet tried to completely knock over the 8,000 lb. concrete Jersey barriers near the start/finish line. By then, Harvick had a comfortable lead of more than eight seconds—and just enough fuel in the tank of the No. 4 Ford Fusion to complete a celebratory burnout on the frontstretch.

“I’m so excited,” Harvick said in Victory Lane. “I think, as you look at it, getting our first win with Ford, this has been a great journey for us as an organization and team. (Teammate) Kurt (Busch) winning the Daytona 500, and we have run well.

“It’s a great day. It finally all came together, and we were able to not have any cautions there at the end. Rodney had great strategy, and I was able to take care of the car and get out front. I felt like the 78 (Martin Truex Jr.) was the car we had to race, and then he had problems and from there we were in control.”

In fact, Truex led a race-high 25 laps to Harvick’s 24 and won the first stage of the race, but the engine in the No. 78 Toyota dropped a cylinder and finally expired, relegating Truex to a 37th-place finish. Truex handed the series lead back to Kyle Larson, who started on the pole but faded to 26th at the finish, one lap down, after a series of run-ins on the asphalt.

Clint Bowyer, Harvick’s Stewart-Haas teammate, was runner-up for the second time this season. Using a contrarian strategy not atypical of his No. 2 Team Penske squad, Brad Keselowski ran third, giving Ford drivers a sweep of the podium positions.

Playing into the hands of Harvick and crew chief Rodney Childers, the race went green from the Lap 55 restart after the second stage (won by Jimmie Johnson) until the final caution after Kahne’s wreck as Harvick approached the finish line.

For the Bakersfield, Calif., native, the Sonoma win was an important item to remove from the bucket list.

“It means a ton to finally check this one off the list,” Harvick said. “I feel like we’ve been close a couple times but never put it all together.

“Being so close to home and having raced here so much, this was one that was on the top of the list and today we were able to check that box.”

Bowyer rolled home second in a No. 14 Ford whose battered body exhibited the dents and dings from a litany of on-track incidents, including an early collision with Keselowski’s Ford.

“Well, let’s face it, short runs have never been my strong suit here,” Bowyer said. “The long runs are, and thank God we got a long run there. I was out of tires. By the time I got done tearing the hell out of my car, I was out of tires. There was some technical strategy that you’ve got to try to play and get track position, and then, all of a sudden, you’re on the bad side of tires trying to hold guys off and you’re blocking.

“They’re stacked up behind them, and it’s just a recipe for disaster. You know, the 47 car down there (AJ Allmendinger), I just didn’t see him and knocked the whole front end off our car. Somebody else I had a really good run on and I thought they were going to give it to me, and they didn’t. Brad spun me out. So, yeah, one of them days.”

Check out the unofficial results of the Toyota/Save Mart 350 at Sonoma Raceway.