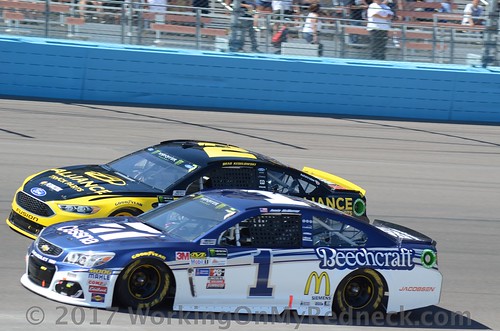 Chip Ganassi Racing (CGR) announced a partnership with California-based 5.11—the global innovator in tactical apparel and gear—to become the new apparel, gear and accessories outfitter of the racing organization. 5.11 will also serve as the official partner of the CGR pit crews and associated training facilities at the Concord, N.C. and Indianapolis-based race shops.

Under the new partnership, 5.11 and CGR will create unique social and digital content featuring the pit crews throughout the remainder of the 2017 racing season. 5.11 will also be an associate partner on the No. 1 Chevrolet SS driven by Jamie McMurray for two Monster Energy NASCAR Cup Series (MENCS) races.

Tom Davin, CEO, 5.11: “We are proud to support CGR’s mission with 5.11 purpose-built gear. Our brand is tightly connected to motorsports. Our versatile gear performs in challenging environments, from rugged outdoor settings to high-speed action in the pits. Becoming part of the Ganassi family is a match between two top-performance brands.”

Steve Lauletta, President, Chip Ganassi Racing: “We’re excited to welcome 5.11 to Chip Ganassi Racing. The quality of their product offering for our team at the race track was at the center of this decision as the apparel’s style, functionality, and most importantly, durability made 5.11 an easy choice for us to partner with. Plus, their excitement for NASCAR has continued to grow over the last several years and being able to introduce them to our team in the world of IndyCar racing is exciting for all of us. We’re also happy to showcase all of our pit crew members in both our social and digital content.”

With offices around the globe, 5.11 works directly with end users to create purpose-built apparel and gear designed specifically to enhance the safety, accuracy, speed and performance of tactical professionals and enthusiasts worldwide. 5.11 products exceed rigorous standards, which have allowed the brand to establish a reputation for innovation and authenticity, and become the premier choice for those who must always be ready. 5.11 is a portfolio company of Compass Diversified Holdings (NYSE: CODI). Learn more about 5.11’s best-selling tactical gear and accessories at www.511tactical.com Connect with 5.11 on Facebook Twitter@511Tactical and on Instagram @511Tactical #511tactical.

Chip Ganassi has been a fixture in the auto racing industry for over 30 years and is considered one of the most successful as well as innovative owners the sport has anywhere in the world. Today his teams include four cars in the Verizon IndyCar Series, two cars in the Monster Energy NASCAR Cup Series, two cars in the NASCAR XFINITY Series, two factory Ford GT’s in the IMSA WeatherTech SportsCar Championship, and two factory Ford GT’s in the FIA World Endurance Championship. Overall his teams have 18 championships and more than 190 victories, including four Indianapolis 500s, a Daytona 500, a Brickyard 400, seven Rolex 24 At Daytonas, the 12 Hours of Sebring and the 24 Hours of Le Mans. Ganassi boasts state-of-the-art race shop facilities in Indianapolis and Concord, N.C., with a corporate office in Pittsburgh, Pa.