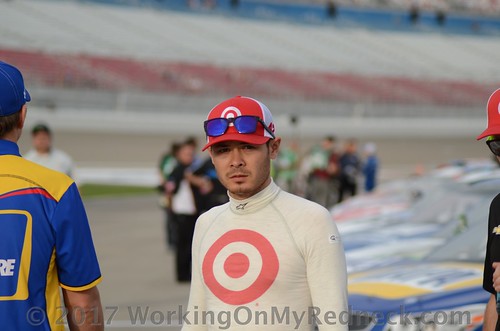 Saturday’s One Main Financial 200 ended as it started – as a two-man show with polesitter Kyle Larson on top.

“YoungMoney” and Ryan Blaney were in a class by themselves at Dover International Speedway in the 11th NASCAR XFINITY Series race of the season. In winning for the third time in six starts this season, Larson led 137 of the 200 laps to Blaney’s 28.

In fact, Larson now has three wins, a second and a third this season for an average finish of 2.5 – numbers that could rival those of another Kyle, XFINITY Series all-time victory leader Kyle Busch.

“This is the best car I’ve had here. At a lot of the tracks we’ve gone to, it seems like this is the best XFINITY car I’ve had this time around. Just a lot of fun. Hats off to (crew chief Mike) Shiplett and the rest of the mechanics at the shop and the engineers – the real reason I’m getting to run up front more often.”

A first-time winner at Dover, Larson collected the eighth victory of his career, finishing 1.173 seconds ahead of Blaney. Third-place Daniel Suarez crossed the stripe 14.078 seconds behind the race winner.

Cole Custer ran fourth, followed by Ryan Reed and William Byron, but Byron got the biggest consolation prize. The Sunoco Rookie of the Year candidate collected a $100,000 bonus as the highest-finishing series regular among four drivers eligible for the prize in the last of four Dash 4 Cash events this season.

But the day belonged to Larson, who led the first 63 laps and had to win a drag race with Blaney to secure victory in the first 60-lap stage. After the second stage, won by Darrell Wallace Jr., divergent pit strategies shuffled Larson and Blaney to 13th and 14th, respectively, for a restart on Lap 128.

To Blaney, that was the key moment in the race, as his No. 22 Ford lost positions in a near-wreck with Wallace and couldn’t close on Larson despite a subsequent restart on Lap 141, after Blake Koch tangled with Daniel Hemric and Brennan Poole and nosed into the inside wall.

“We almost got wrecked when the 6 (Wallace) got loose below whoever that was, the white car (the No. 90 of Brandon Brown), and that actually cost us the race,” Blaney said. “That allowed Larson to get by us, and he set sail from there, even though there was another restart.

“He was about three rows ahead of us, and I couldn’t run him down by the time I got to second.”

Check out the unofficial results of the ONe Main Financial 200.