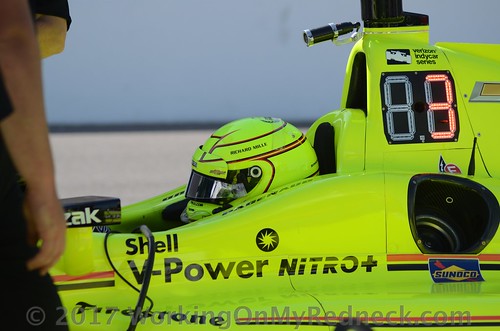 Recap: Simon Pagenaud started the 101st running of the Indianapolis 500 from the 23rd position and quickly went to work moving through the pack. The defending Verizon IndyCar Series champion worked his way to just outside the top 10 in a little over 50 laps. His Menards Chevrolet showed enough to contend for a top-10 position, but on a restart in the middle portion of the race Pagenaud suffered some damage to the lower-left rear pod which seemingly added some drag to the No. 1 car. From that point forward the native of France had a difficult time mounting a challenge. Then, it became a matter of collecting as many points as possible. Throughout the event the No. 1 Chevrolet battled handling in traffic. Several front and rear wing adjustments were made in an attempt to cure the problem. At the end, Pagenaud found the balance he was seeking, but the damage to the back of the car kept him from cracking the top 10. Pagenaud was replaced at the top of the championship standings by teammate Helio Castroneves, but is just 11 points behind as he seeks his second straight series title.

Quote: “It wasn’t the finish we wanted today for the Menards Chevrolet team. But for the big picture it was a decent day. We’re still in that top group in points as we head to Detroit that’s a place that suit us pretty well. The (Indianapolis) 500 remains a goal and we’ll take another shot at it next year. We had a balanced car and the guys worked on it all the way through the race. I think that damage to the rear wing added some drag and that was something we couldn’t afford. Congratulations to Takuma Sato. He was fast all month.” 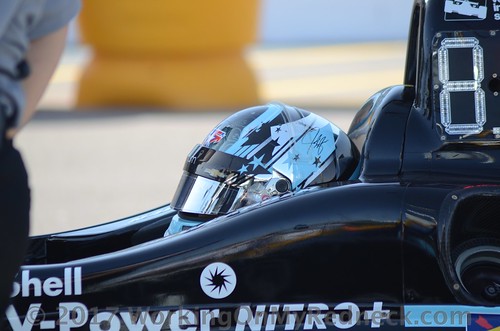 Recap: Josef Newgarden looked to have a shot at a top-five finish in Sunday’s 101st running of the Indianapolis 500, but a late-race accident knocked the first-year Team Penske driver out of the running and he finished a disappointing 19th. Newgarden, along with the rest of the Team Penske team, struggled in qualifying last weekend and started the race in the 22nd position. Early in the running of the legendary 500-mile race, Newgarden struggled with the Hum by Verizon Chevrolet that was suffering from a severe understeer condition. The team continued to make aero adjustments stop after stop and the car continued to get better and better. Newgarden then began climbing through the field, eventually getting into the top-10. However, on lap 184, Newgarden was collected in a multi-car accident that also collected teammate Will Power. The No. 2 Hum by Verizon Chevrolet suffered some damage to the rear suspension. The team was able to make repairs and Newgarden was able to finish the race, coming home in the 19th position. He sits seventh in the Verizon IndyCar Series point standings.

Quote: “It was an OK day. We just got caught up in that wreck there at the end. That hurt us. When the Hum by Verizon Chevy was up front we were good. We seemed to keep racing ourselves toward the front of the field. Then we would just get dropped back by a couple of issues. If we would have been up front the whole time, I think we could have finished in the top-five. We performed really well today; things just didn’t go out way.” 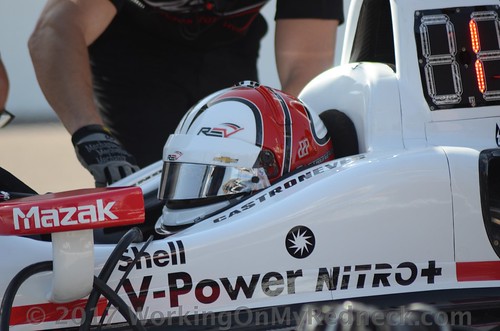 Recap: Helio Castroneves headed into the 2017 Indianapolis 500 at Indianapolis Motor Speedway as a three-time winner of the event with a desire to land his fourth trip to Victory Lane, but ended up in second-place after an incredible battle with Takuma Sato. Castroneves’ impressive performance led to capturing the points lead for the 2017 Verizon IndyCar Series as it heads to Detroit next weekend. Castroneves began the legendary race running 19th and briefly fell to 21st on Lap 1 before attempting to march to the front. After the first round of pit stops, Castroneves still was mired in the middle of the pack. In an early race incident between Jay Howard and Scott Dixon, Castroneves was able to avoid disaster, but did suffer some damage to both his front and rear wings. Following the red flag for track cleanup, he pitted to replace the front wing. The team monitored the damage on the rear wing but ultimately decided not to make repairs. Castroneves was penalized on a Lap 75 restart for jumping the start and after serving the drive-through penalty, he was scored in the 26th position. From there, he was able to make up some ground and moved up to the third position – his highest to that point. Castroneves worked past Ryan Hunter-Reay on Lap 96 and paced the field for the next eight laps before heading to pit road for a scheduled stop. With 50 laps to go Castroneves was firmly entrenched in the top five. The stage was set for an exciting battle for the win when the green flag waved on Lap 189 following the final caution of the day. A pass for the lead on Lap 194 brought a huge roar from the crowd, but Sato was able to return the favor on the very next lap and hang on for the victory. In the point standings, Castroneves has an 11-point advantage over a trio of drivers that includes teammate and defending series champion Simon Pagenaud.

Quote: “What a race. Yes, a little bit disappointed but at the same time we did a phenomenal job. Team Penske did a great job preparing the No. 3 Shell Fuel Reward Chevrolet that was pretty good. But unfortunately towards the end there, we just didn’t have enough. Honda was pulling strong power. With a combination of good pit stops and with a good balance of the car, we were able to finish second. With that, we take the lead of the championship and I feel there is always a positive story in this race. Good job to Takuma Sato and Andretti Autosport for their result. Next year we’ll come back strong.” 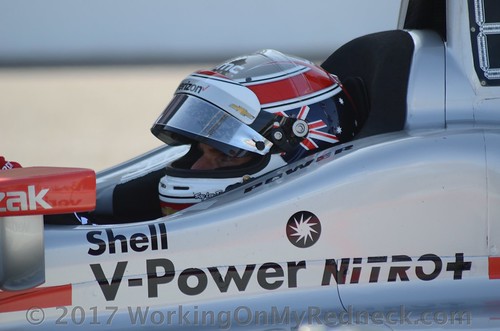 Recap: Will Power came into the Sunday’s running of the Indianapolis 500 as the top-starting Team Penske driver in the ninth position, but a late-race accident knocked the No. 12 Verizon Chevrolet out of the race and resulted in a 23rd-place finish. Just after the green-flag, Power raced his way all the way up to second in the early laps, but then began to drop back as the car was imbalanced. On lap 53, two other competitors wrecked and Power took evasive action to miss the accident, but in the process damaged his rear wing, which forced the team to replace it during the following round of pit stops. Power did lead the race at one point when he stayed out as other teams pitted, but again dropped back with an ill-handling car. Unfortunately, on Lap 184, Power got collected in a multi-car accident that knocked the 2014 series champion out of the running. Despite the 23rd-place finish, Power moved up to eighth in the Verizon IndyCar Series point standings.

Quote: “I’m not sure what happened out there. All I know that I was sliding backwards. It was an up and down day for the Verizon Chevy. We were able to stick our nose in there a few times and we were stuck back in the back other times. Then, we got caught up in that deal at the end that ended our day. We’ll move on to Detroit. The thing about this race is that we get to turn the page pretty quickly.” 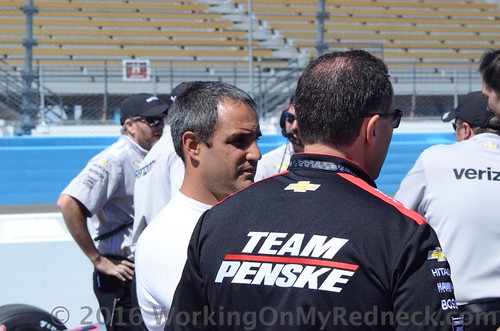 Recap: Juan Pablo Montoya came to Indianapolis in search of his third Indy 500 victory and rolled off the grid in the 18th position. The veteran from Colombia made his only two Verizon IndyCar Series starts of the season at the two Indianapolis events behind the wheel of the Fitzgerald Glider Kits Chevrolet and was able to score top-10 finishes in both events. In his five Indianapolis 500 starts, Montoya now has four top-10 performances including the two victories. He went to work right away weaving his way through traffic. As teams cycled through the first round of pit stops under green, Montoya led Lap 31. However, a fuel miscalculation on that run resulted in the No. 22 car running out of gas in Turn 3. The setback, while temporary, was significant. Montoya then started another march to the front with a full load of fuel. He worked his way forward and nosed around the top 10 again and was able to remain there for the second half of the race. It wasn’t until the closing laps that he was able slide into the sixth spot in front of Alexander Rossi, the defending race winner. The Montoya team, as a fifth Indianapolis entry for Team Penske, was a new collection of personnel that was able to collect two solid results in the month of May.

Quote: “Our Fitzgerald Glider Kits Chevy was good. We had a problem there in the beginning when we ran out of gas in Turn 3. We should have had another half-gallon in the car. It put is in a tough position because we lost a lot of positions there. From there to come back to where we finished was great. We ran 12th or 13th most of the day and then the car was really good at the end of the race. The balance just wasn’t there. Then I told the guys on the last stop, let’s take swing and we did and the car came to life. I would have liked to have had some more laps at the end.”