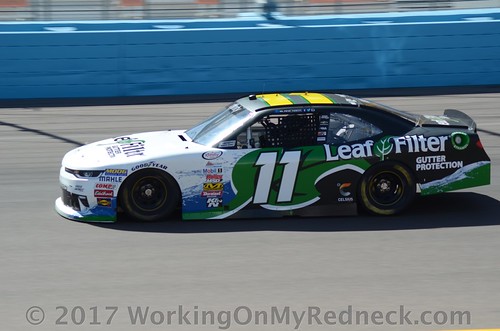 Kaulig Racing announced today that NASCAR XFINITY Series driver Blake Koch and the No. 11 LeafFilter Gutter Protection team will pay tribute to America’s military members with a patriotic paint scheme for this Saturday’s Hisense 4K TV 300 at Charlotte Motor Speedway (CMS). Additionally, the team will honor fallen U.S. Air Force Captain Nathan Nylander by displaying his name above the passenger-side door of the No. 11 Camaro.

“I’m so honored to be able to carry such symbolic colors on our No. 11 LeafFilter Gutter Protection Chevy this Memorial Day weekend and to honor Cpt. Nylander and meet his family,” said Koch. “LeafFilter is committed to production in the U.S. and are so supportive of our desire to honor our military this weekend at Charlotte. I cannot say enough thanks to those who have made the ultimate sacrifice, as well as their families, for allowing us to be free and do what we love.”

Nylander was a flight commander with the 438th Air Expeditionary Advisory Group from Davis-Monthan Air Force Base in Tucson, Ariz. In 2011, Nylander was deployed in Kabul, Afghanistan as a weather advisor when he was killed by an Afghan military pilot. For his service, he was awarded the Silver Star award. Additionally, the 25th Operational Squadron in Tucson was rededicated as the Nylander Building.

According to Nylander’s wife, Miriam Hamilton, he was a huge NASCAR fan and had previously attended races in Phoenix, Las Vegas, Homestead and Daytona.

“After his (Nathan’s) death, my children and I fulfilled one of his life long dreams,” said Hamilton. “We bought a motor home, reserved an infield spot at Daytona and did the whole weekend experience. We also took some of Nathan’s ashes and scattered them at Lake Lloyd at Daytona.”

Nylander, who was originally from Fairbury, Ill., enlisted in the military right out of high school in 1994. He met his wife Miriam in 1997 at Patrick Air Force Base in Brevard County, Fla. The couple had three children and made numerous moves throughout the country. Nylander’s family will attend the NXS race at CMS this weekend and meet the No. 11 team and driver Blake Koch.