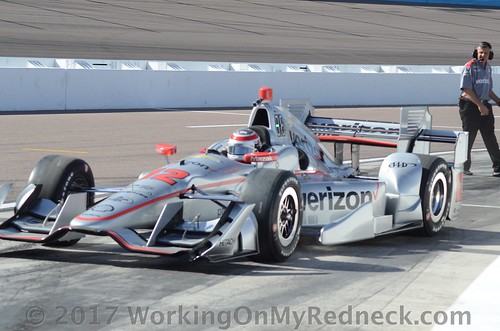 Recap: Coming off his win at Phoenix International Raceway just one race prior, Simon Pagenaud finished fourth in the INDYCAR Grand Prix at Indianapolis Motor Speedway, maintaining his lead in the 2017 Verizon IndyCar Series championship standings. Pagenaud began the race in the seventh position but after a collision between the No. 10 and No. 27 cars on Lap 3, he was forced to maneuver to avoid the collision. The result of the evasive action saw him fall to the ninth position. He maintained that position until Lap 18 when was able to move up one spot to eighth in the running order. On Lap 21, the Frenchman brought his No. 1 Menards Dallara/Chevrolet to the pits for four tires and fuel. On Lap 23, Simon was able to move into sixth, a position he maintained for much of the event. Pagenaud returned to the pits for four tires and fuel on Lap 42. After the stop, he found himself in the seventh position until Lap 50 when he moved back into sixth place. On Lap 64, he made his final stop of the race with the No. 1 Menards Chevrolet taking on four tires and fuel and he settled back into sixth position. On Lap 68, Simon moved into fifth, which started his momentum toward his finishing position. On Lap 84, Pagenaud was able to take control of fourth place and he ran there over the final lap until checkered flag waved. A two-time winner of the Grand Prix in Indianapolis, Saturday’s result marked the third top-four finish for Pagenaud over four starts in the event. Pagenaud will carry a 10-point advantage in the standings into the 101st running of the Indianapolis 500. After winning the 2016 Verizon IndyCar Series championship, the legendary race is the next and largest item on his career goals list as he seeks his first victory in the “greatest spectacle in racing.”

Quote: ““We had a good day. I mean it was a difficult weekend for us on the No. 1 Menards Chevrolet car. I didn’t have the speed this weekend. I couldn’t find how to feel more comfortable with the tires – the new Firestone tires they brought this weekend. I didn’t have the speed Will [Power] had. Overall, bringing home a fourth-place finish is good. We’re still in the lead for the championship which is what I want. I’m just super excited next is the Indy 500. It’s my number one goal this year and I know Roger [Penske] is really excited about it. My team is really excited and I want to bring the Menards car to the top step.”

Recap: Josef Newgarden had a tough day at the INDYCAR Grand Prix at the Indianapolis Motor Speedway Saturday after finishing 11th in the road course event. He began the race running third and fell to the fourth position after a Lap 2 collision between the No. 10 and 27 cars. On Lap 22, Newgarden brought the No. 2 Hum by Verizon Dallara/Chevrolet to pit road for four tires and fuel. After pitting, he moved back into the fourth position. On Lap 44, Newgarden returned to pit lane for his second stop with the Hum by Verizon Chevy getting four tires, fuel and a wing adjustment. Following that pit stop, Newgarden was running in the fifth position. He moved up one spot to fourth by Lap 50 before things started to go south for the team on pit lane. Newgarden made his final stop on Lap 63, but unfortunately, the No. 2 car was caught speeding while exiting pit road and Newgarden had to serve a drive through penalty, followed by another penalty for speeding on the drive through. As a result of the infractions, Newgarden fell back to the 13th position. By Lap 75, he was able to move up to 12th. On Lap 80, the winner at Barber Motorsports Park this year settled into the 11th position where he remained until the end of the race. The 11th place finish still marked Newgarden’s top finish in the INDYCAR Grand Prix at Indy. Still ranked third in the point standings, Newgarden now turns his focus to the Indianapolis 500, where he looks to capture his first win in the historic event.

Quote: “I don’t know what happened. I think we ran into some sort of glitch and they dinged us two times for speeding on pit road. It was a tough day for us. We had a really fast Hum by Verizon car. We really didn’t struggle with much today. We started a little slower than we had hoped, but at the end the car was a rocket. I’m disappointed for our guys because we did everything right and we had great stops, we just had a little glitch there. We had a great racecar and just couldn’t capitalize. I think we had a car that could have been a podium car, maybe even a second-place car. We just didn’t capitalize today. Congrats to Will though. He was strong all weekend long.”

Recap: It was another “what could have been” race for Helio Castroneves and the No. 3 Verizon Chevrolet team. After starting from the outside pole position, the tire strategy during the race didn’t play out the way the team would’ve liked. All of the top 10 cars started the race on the Firestone alternate tires, but following the first round of pit stops after the 20-lap mark, Castroneves’ team opted to run another set of alternate tires. That part of the plan worked out well as the three-time Indy 500 champ claimed the race lead from polesitter Will Power and built a nearly four-second lead. On the third stint with both he and Power on alternate tires, Power was able to regain the lead with Castroneves still needing to satisfy the rule of having to run both tire compounds during the race. On the final segment of the race, the primary tires for Castroneves just weren’t enough, but was able to hang on for a fifth-place finish – his third consecutive top-five result. Castroneves has also finished inside the top six in all four of his career results in the INDYCAR Grand Prix in Indianapolis. In the championship standings, Castroneves is fourth – 42 points off the pace set by teammate Simon Pagenaud. Castroneves will be looking to tie the all-time record with four Indy 500 wins when he takes the green flag at the Indianapolis Motor Speedway on May 28.

Quote: “I thought we had figured something out with some strategy there at the end, but the car was a handful. The Verizon Chevy was great all day long. We decided to take a gamble and get off on tire strategy and it just didn’t work like we had hoped. We have five good cars that can all win the race, so someone had to take a chance. We probably shouldn’t have done it that way knowing we finished fifth, but if we would have won everyone would be looking at us saying wow. I also ended up wasting a lot of push to pass trying to get through traffic. Look, sometimes it goes your way, sometimes it doesn’t. Now, we got to focus on the 500 and getting our fourth.”

Recap: After having a fast car all season long but with no wins to show for it, Will Power finally got his first victory of the season on Saturday afternoon in the INDYCAR Grand Prix on the road course at Indianapolis Motor Speedway (IMS). It marked his 30th career win in INDYCAR, which ranks 10th on the all-time list and snapped a tie at 29 wins with Team Penske legend Rick Mears and current teammate Helio Castroneves. Power dominated the weekend taking the top spot in every session and he hopes Saturday’s performance springboards him for the rest of the month as the attention turns to the Indianapolis 500. Power talked of a vibration in the first 10 laps of the race Saturday, but that problem resolved itself before the first stop. The strategy to use Firestone primary tires in the second stint of the race worked to perfection for the No. 12 Verizon team. With two sets of the faster alternate tires to close the race, Power was positioned to hold off any comers at the end and he beat Scott Dixon to the finish line by 5.28 seconds. The victory gave Power consecutive podium finishes and vaulted him to fifth in the point standings – now 46 markers behind teammate Simon Pagenaud. For Power, it also represented his second win in the INDYCAR Grand Prix at Indianapolis, to go along with his 2015 victory. After leading a race-high 61 laps Saturday, Power hopes to lead more later this month at IMS in the 101st running of the Indy 500.

Quote: “I knew (Scott) Dixon was closing there for a while so I was really trying to manage the gap and manage the tires. They degraded a lot. You have to hit all of your marks, and if it is your day, it is your day. I have to say the Verizon Chevy engine was mega today. Chevy has done a great job. Honda got a little bit of a gain on us, but we are already back. I have been around motorsports long enough to know that you have you have your good and bad runs and the bad doesn’t last forever, and the good doesn’t last forever. You just have to take it as it comes and not have too many ups and downs emotionally. Having a baby teaches you that. It feels really good to finally have a good day. Everyone on this team has been working really hard. We should have had a couple of wins by now. It helps with the points; feels good to win again.”

Recap: Juan Pablo Montoya made his return to the Verizon IndyCar Series on Saturday afternoon at Indianapolis Motor Speedway, finishing 10th in the INDYCAR Grand Prix. It marked the first start in the series since the last race of the 2016 season for the former series champion and two-time Indy 500 winner. As the green flag flew, Montoya had a great start diving down into Turn 1, while working his way up to fourth place. However, by the end of the first lap, he’d fallen back to his original starting position of fifth. Montoya struggled with grip on his first set of red Firestones and lost several positions, settling into 10th. After an aero change and a sticker set of black tires, Montoya held steady in the 10th position and didn’t vary much for the rest of the race. Despite a few more air pressure changes on the remaining pit stops, Montoya couldn’t get his Fitzgerald Glider Kits Dallara/Chevrolet to advance the way he wanted on the Indy road course as he brought home a 10th-place finish. Montoya will continue with Team Penske this month, once again racing the No. 22 Fitzgerald Glider Kits Chevy in the 101st running of the Indianapolis 500 as he searches for his third win in the biggest race of the season.

Quote: “We just didn’t have the pace that we were hoping to have in the No. 22 Fitzgerald Glider Kits car today. We struggled on the red tires and on the first run, I felt like we blistered the rear and we lost some time there. Once we got back to about ninth or 10th, we just stayed right about there the rest of the race. It was a fun weekend, but we now turn out focus to the Indianapolis 500. That is the race we want to win and that is what we will think about starting now.”

Next Race: The Verizon IndyCar Series now turns its attention to the 101st running of the Indianapolis 500 with qualifying on May 20-21 and the race on Sunday, May 28. Television coverage will be provided by ABC. Tune into the INDYCAR Radio Network or log on to IndyCar.com for additional coverage.