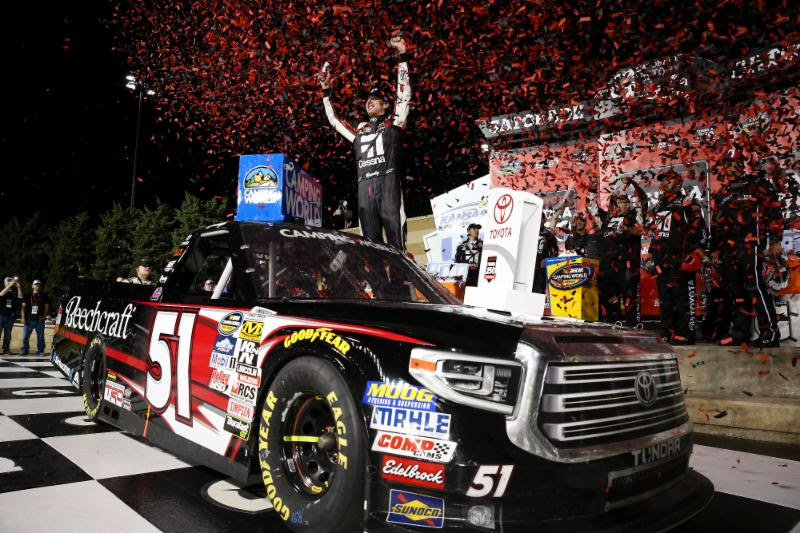 Kyle Busch and the No. 51 Toyota Racing team found themselves in Victory Lane after Friday’s Toyota Tundra 250 at Kansas Speedway. Busch led the field for 91 laps and won both stages of the race en route to his 47th win in the NASCAR Camping World Truck Series (NCWTS).

KYLE BUSCH, driver of the No. 51 Cessna Tundra for Kyle Busch Motorsports:

“Thanks, you know this was a great win for us, but really it’s a terrible loss for Ben Rhodes. He had this race won. I was trying everything I could to catch him and run him back down. I could gain a little bit on him and then I’d lose a little bit on him and just kind of went back and forth a little bit. That’s a Rowdy Manufacturing chassis and a KBM body on the 27 (Ben Rhodes) truck so we knew it was going to be tough to beat and it was fast and he was one of the guys we had to race with all night long. He did a phenomenal job. It’s a tough one to lose that way, I know, because I’ve lost them that way as well. But for him to be racing against us and to be doing an awesome job, man, he raced me clean. He did a great job. He got by me. No issues there with lapped traffic and stuff like that. He did a really good race, so it was fun. It’s cool to see young guys like that have great opportunities and to be fast and to make the most of it. It was a battle there, but this Cessna Tundra prevailed and we got to victory lane ourselves. Great job by (crew chief) Bono Manion, everyone on this No. 51 team. This Cessna truck was fast and can’t say enough about NOS Energy Drink, Rowdy Manufacturing, Incredible Bank, all of our partners at KBM.”

Noah Gragson, driver of the No. 18 Toyota, finished 28th

Christopher Bell, driver of the No. 4 Toyota, finished fourth

The No. 51 Toyota Racing team is now third in the Truck Series Owner Championship Standings.

Kyle Busch will pilot the No. 51 Cessna Toyota Tundra when the Truck Series races at Charlotte Motor Speedway in Concord, N.C. on May 19. Live coverage of the North Carolina Education Lottery 200 begins with the NCWTS Setup Show at 8:00 p.m. ET.