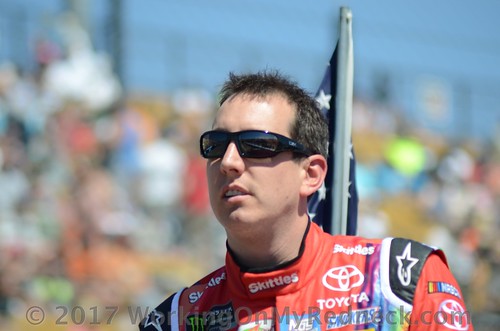 As it turned out, Kyle Busch was prophetic when he talked about the changing character of Bristol Motor Speedway.

“I’m sure (Kyle) Larson’s thrilled and he’ll have to rubber in the top himself while the rest of us are rooting and gouging for the bottom,” was Busch’s tongue-in-cheek assessment of the racing characteristics of the .533-mile short track, where Monster Energy NASCAR Cup Series drivers will compete in the Food City 500 on Sunday.

Bristol is different this spring, thanks to a wider denser strip of VHT TrackBite applied to the bottom lane through both sets of turns at Thunder Valley. For the past few years, after Bristol ground the outside lane of the concrete surface in 2012, the top lane was superior after it had a chance to take on rubber.

The application of the track sealer, to a greater degree than was used for last year’s Night Race in August, has flipped the equation, and drivers speculated that the bottom lane would be the faster lane on Sunday.

If that’s the case, the action at Bristol would harken back to the old days, when the best way to pass a car was simply to bump it out of the way.

“I think you’re going to see the bottom lane does wear off a little bit as the weekend progresses,” Busch told the NASCAR Wire Service. “It looks like they did a little more here this time than they did last time, so we’ll see how that transpires and what that means.

“From what I’m watching already, there’s a lot of bottom going on and not a whole lot of middle or top.”

And sure enough, when cars took to the track for Saturday morning’s first Monster Energy NASCAR Cup Series practice, there was Larson, the polesitter, in his No. 42 Chip Ganassi Racing Chevrolet singlehandedly trying to rubber in the top groove.

With about seven minutes left in the session, Larson spun and clipped the outside wall but the cosmetic damage to his Chevy wasn’t enough to force the team to a backup car. After repairs to the sheet metal, Larson was back in action for final practice.

“I feel like it would still be really fast up there (in the top lane), it’s just nobody is brave enough to go up there and work in the groove,” Larson said. “The VHT is wider than the width of our race cars now, too, which makes it extremely easy to run around the bottom…

“I thought the fall race (last year), I think it was like three or four feet wide. I thought that was a good width because you could get your left sides in it, and you really had to be cautious of hitting your marks every corner.  Now it’s like you just fire off from the corner and it doesn’t really matter where you enter, and as long as your right sides are in the grip, you’re going to rip around the corner.”

After running 30 laps on the bottom during Happy Hour, Larson moved up to the top, stubbornly trying to work in the outside groove. Shortly thereafter, Ty Dillon followed into the top lane, and seven-time champion Jimmie Johnson did the same.

All told, Larson ran 59 laps in final practice, finishing 26th fastest among the 37 drivers who participated.

The Food City 500 is going to be a very interesting race.  Will the bottom groove or the top groove be the fastest way around that joint?  That is the burning question!