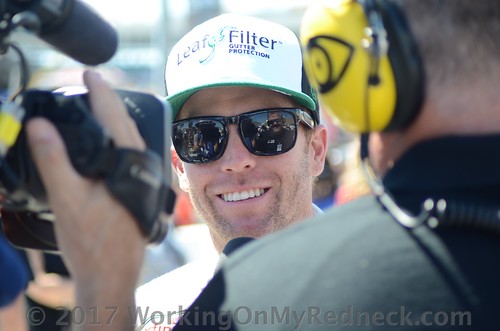 Kaulig Racing driver Blake Koch drove the No. 11 LeafFilter Gutter Protection Chevrolet Camaro to a 16th-place finish on Saturday in his 13th start at the 1.5-mile oval. The reconfigured track surface proved challenging at times for Koch and the No. 11 team, but with the right adjustments, Koch fought for a respectable finish and maintained a top-10 position in the NASCAR XFINITY Series (NXS) championship standings.

“Today was frustrating at times just trying to figure out the right adjustments I needed to roll through the corners at the ‘new’ Texas,” said Koch. “As always, we never gave up and that paid off. It was a good points day for our LeafFilter Gutter Protection team. We will go back to the drawing board and be ready to fight for a top-10 finish when we return to Texas in the fall.”

Crew chief Chris Rice and the No. 11 LeafFilter Gutter Protection team made several adjustments to Koch’s Camaro during both NXS practice sessions on Friday, ending the sessions 21st- and 19th-fastest respectively. Koch and the team propelled up the speed charts during NXS qualifying on Saturday morning, finishing the first round 12th fastest and ultimately securing an 18th-place starting position for Saturday’s 200-lap event.

Soon after the green flag dropped on the first 45-lap stage, Koch reported that the car was too free. The team got their first chance to correct the free condition on Lap 12 when the first caution was displayed. Koch pitted from the 20th position for four fresh tires, fuel, track bar and wedge adjustments. Because most of the field did not pit, Koch restarted in the 30th position on Lap 15.

Just over 15 laps later, Koch had made his way up to the 23rd position and reported the car was still too loose. He held on to finish 21st in Stage 1 when the caution flew at Lap 45. At the end of the stage, Koch visited pit road for fresh tires, fuel, track bar and spring rubber adjustments. After the field finished pit stops, NASCAR put the race under a red flag to clean up oil on the track. When the field returned to green on Lap 57, Koch restarted 22nd.

Four laps after the start of Stage 2, the field was slowed by caution. Koch gained two spots on the impending restart and ran there until the caution flew again on Lap 66 for a multi-car incident. Koch narrowly avoided a car spinning down the racetrack, but reported to Rice he felt that he had suffered some damage to the nose of the car. It was determined to be insignificant, allowing Koch to stay out on track and restart 12th on Lap 71.

When the stage ended, Koch pitted for tires, fuel and an air pressure adjustment. He restarted 27th on Lap 97, the beginning of the third and final stage of the 200-lap event. He continued to report loose conditions throughout the final stage, until Lap 120 when he told the team the car had swung to the tight-side through Turns 3 and 4. With 45 laps remaining, Koch came down pit road from the 18th position for a green-flag stop. Rice called for tires, fuel and an air pressure adjustment. After the green-flag stops cycled through, Koch maintained the 16th position and ran there until he took the checkered flag at Lap 200.