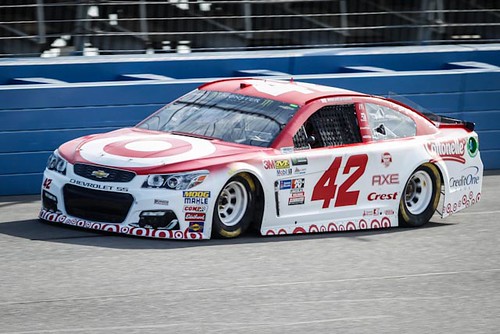 The damage to the right side of Larson’s No. 42 Chip Ganassi Racing Chevrolet SS was cosmetic, and in short order his team had the series leader back on track.

Elliott’s issue was more serious. Shortly after he posted the fastest lap in the session at 187.480 mph, the No. 24 Chevy’s contact with the wall pushed the right rear quarter panel into the rear deck lid and knocked the deck lid out of kilter.

As Final Practice ended, Elliott’s Hendrick Motorsports team was evaluating possible chassis damage and trying to repair the car, but a final decision hadn’t been made as to whether Elliott will have to go to a backup and lose his starting spot in Sunday’s Auto Club 400 (at 3:30 p.m. ET on FOX).

“We had a part come loose on the left front, and it’s obviously something that needs to be together to make laps,” Elliott said of the cause of the accident. “I’m not real sure why it broke or why that happened. It was nothing fancy that we were doing. I was getting into (Turn) 3 at the time.

“I don’t know if it was some sort of roughness to the race track that bounced it loose, or what. I was really happy with the NAPA Chevy throughout that run. Unfortunately, this now puts us behind. But we’ll look into it and try to get this car fixed for tomorrow. We would love to keep this primary car. I don’t know if we can or not. I know they’ll work hard and try to get it tuned up for tomorrow.”

Both Busch brothers also had issues in final practice, with Kyle spinning late in the session and Kurt brushed the wall with his No. 41 Ford Fusion late in the final minutes.